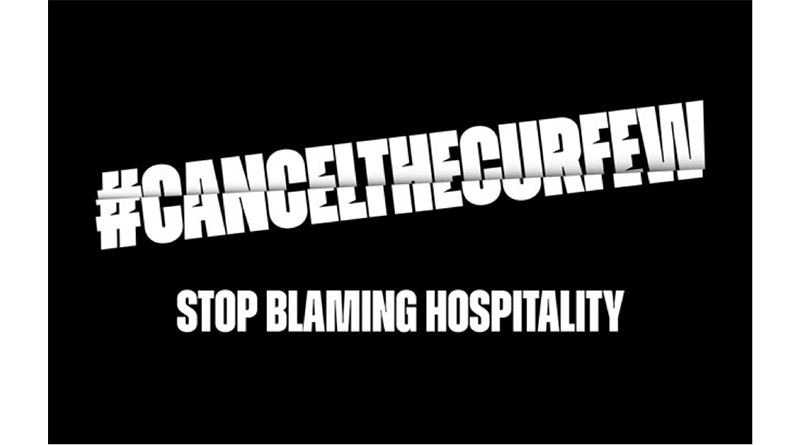 Hospitality professionals across the UK have joined forces to launch Cancel the Curfew, (#CANCELTHECURFEW) a campaign calling for the termination of the 10pm hospitality curfew instated by the government last Thursday. Campaigners have written to Prime Minister Boris Johnson who have written to UK prime minister Boris Johnson warning that the 10pm curfew implemented in an attempt to stem the spread of Covid-19 will spell “the end of the hospitality industry as we know it”.

The open letter read: “Our industry is dying and the 10pm curfew may be the final nail in the coffin.

“Up and down the country, our pubs, clubs, bars, restaurants, music venues, theatres, event spaces and all other businesses that fall under the hospitality industry’s umbrella are teetering on the edge. Some are suffering death by a thousand cuts, while others have been ignored and left to starve.

“If nothing changes then hundreds of thousands of people will lose their jobs, thousands of businesses will close their doors forever, billions of pounds of tax income will be lost, and the hospitality industry will never be the same again.”

To demonstrate the negative impact of the curfew on the nation’s hospitality venues, Cancel the Curfew has asked hospitality businesses, workers and supporters to post its campaign assets on social media with the hashtag #CancelTheCurfew, and to share posts explaining how the curfew has affected trade.

The campaign has also organised a silent protest for Saturday, 3 October, asking hospitality workers to stand outside their venues from 10pm-10:15pm holding #CancelTheCurfew signs.

The campaign reports that venues have experienced a 60% drop in revenue since the curfew began. Meanwhile, data released by the government shows that between 14 August and 20 September, just 3% of Covid outbreaks were attributed to hospitality venues, compared to 42% in schools.

Tom Lord, hospitality consultant and founder of Hospitality Gin, said: “The industry that we love is in grave danger of being suffocated by this curfew.

“Some venues were starting to see a light at the end of the tunnel before it was announced as customers returned and we all settled into the ‘new normal’. Now we’ve been plunged back into uncertainty.

“We want the British public to know the impact that the curfew is going to have, not just on our businesses, but on our friends and colleagues.

“We have borne the brunt of the measures announced over the past fortnight. We are vilified as breeding grounds for the virus yet Public Health England’s own figures show this is not true. In fact, the latest figures show that we have one of the lowest infection rates outside of the home.

“Hundreds of thousands of people will lose their jobs as a direct result of this disastrous policy, thousands of businesses will close their doors forever, and the hospitality industry will never be the same again. Stop blaming hospitality, let us serve”