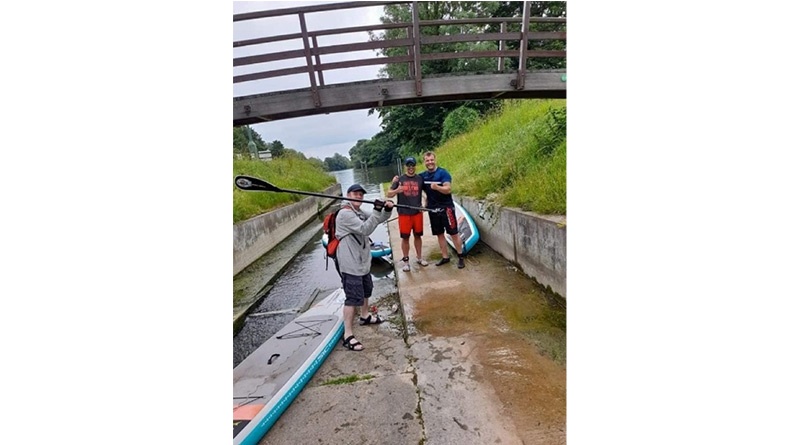 The team from Stonegate Group completed their 75km paddle boarding challenge last week and raised over £5,000 for the British Heart Foundation, the UK’s leading charity funding research into heart and circulatory diseases and their risk factors. The total fundraising figure was reached from both in-venue collection as well as multiple Just Giving pages. The paddle boarding team consisted of: Adrian Diggory, General Manager of The Anglers, Walton-on-Thames, Luke Jones, Area Manager of Stonegate Group, and Matt Samler, General Manager of the Crown, Egham.

With only two hours of previous training, the team set out at the early start time of 5.30am. Fourteen hours later, at 7.30pm with daylight to spare, they rounded the corner at Walton Bridge and saw all their colleagues, customers and the trainers from the Blue Chip Paddle Boarding School waiting for them, cheering them on to the end. To make sure they had the fuel to finish, their fellow Stonegate pubs gave their assistance throughout the day. The first stop was the Two Brewers, Marlow for breakfast, followed by a later stop at the Royal Windsor, Windsor for takeaway pints and sandwiches.

Adrian Diggory, General Manager of The Anglers said, “It was an amazing experience, and I am so proud of what we accomplished. The challenge itself was very tough but the fantastic total we raised for a great cause and seeing everyone cheering us on at the finish line made it even more worthwhile.

“We are so grateful to the team at Blue Chip who leant us the equipment for free, gave us the training, and set up a surprise inflatable finish line at the end. Of course, we also want to say a huge thank you to all our customers and everyone that donated.

“The highlight for me was seeing our team and customers waiting for us as we turned the corner at Walton Bridge. Our operational director, Colin Hawkins, was there with a megaphone to shout words of encouragement for the last few yards. We had a lot of fun and the occasional mishap, me falling in around the 50km mark for example. The support we have had for this challenge has been overwhelming, and it took away some of the post-challenge soreness!”