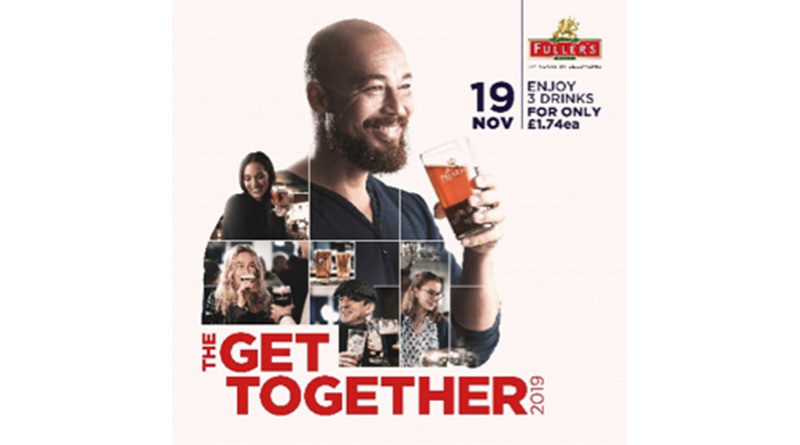 On Tuesday 19 November, Fuller, Smith and Turner, the premium pub and hotel business, is holding The Get Together – an anniversary event held across all its managed pubs. In 1845, the partnership papers of Fuller, Smith and Turner were signed. Since then, Fuller’s has been part of communities, bringing people together, for 174 years and they are inviting everyone to join in the anniversary celebrations.

On the day, customers will be able to enjoy three drinks for £1.74 each in Fuller’s managed pubs.

The choice includes any combination of drinks from a range including beers from Fuller’s and Dark Star, Cornish Orchards ciders, medium glasses of house wine or soft drinks. Customers will need voucher codes to redeem the offer – codes are sent to those who signed up online at www.fullers.co.uk/get-together, or are already on Fuller’s database.

Fuller’s 206 managed pubs were challenged to host an event that truly encapsulates the spirit of The Get Together. Some pubs such as The Prince Albert in Twickenham, The Artillery Arms on Bunhill Row and The Union Tavern in Maida Vale will be hosting live music events. While others – The Hydrant at Monument and The Holly Bush in Hampstead – are holding games nights to celebrate. The Swan by Hyde Park has gone for a more sentimental evening, inviting customers to pin their home country on a world map which will be displayed in the pub. Customers are encouraged to write a message and pin it in their home country on the map – leaving a little memento of their time in the pub.

Fuller’s Marketing Director, Jane Jones, said: “We’re really excited to invite our customers to join in our anniversary celebrations. We’ve been a part of families and communities for 174 years and we wanted to celebrate this with as many people as possible.

“Fuller, Smith and Turner is a Company proud of its rich heritage and, although a lot has changed for us over the past year, our passion for bringing people together and creating great memories is still at the core of what we do. We like to think with 174 years of experience we’re pretty good at it too.”