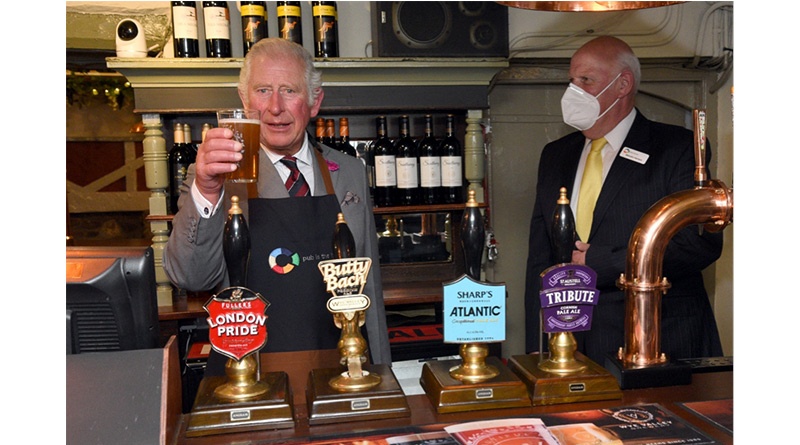 The Prince of Wales has celebrated the finale of his tour of Wales by pulling a pint at Pub is The Hub project The Ponthir House Inn in Ponthir, in South Wales.

Pub is The Hub is a not-for-profit organisation inspired by The Prince of Wales in 2001, which offers independent specialist advice to publicans on rural services diversification so they can provide viable local services at the heart of their community.

During the Covid-19 lockdowns publican Barrie Walden opened a pop-up village store in the dining area of the pub offering a range of essentials. It became obvious that a permanent service was needed by local residents, as there is limited public transport and the nearest town is over three miles away.

Barrie launched a new village store in a log cabin in the pub’s car park with the expert help and a Community Services Fund grant from Pub is The Hub.

His Royal Highness was shown around the pub, including the village store, meeting publican Barrie Walden and chatting to Pub is The Hub chief executive, John Longden and Pub is The Hub advisor Malcolm Harrison.

His Royal Highness was delighted to visit the pub, which has become such an important hub of the local community.

Barrie Walden said: “It was such a privilege to have His Royal Highness visit the Ponthir House Inn. He is such a gentleman and is a great supporter of pubs and independent publicans.

“It was great for my local and loyal customers of both the shop and pub to meet His Royal Highness.  I have to thank Pub is The Hub for all its help to open the village store and for helping to organise a visit from HRH The Prince of Wales.”

Pub is The Hub chief executive John Longden said: “It was entirely fitting that His Royal Highness, who inspired the formation of Pub is The Hub, should pop in and witness the real community spirit of enterprising publican Barrie Walden. Barrie, like many publicans, has gone above and beyond to help people in his local area during the pandemic.

“His Royal Highness has been a great champion of Pub is The Hub and supporter of pubs and publicans. It was fantastic for Barrie to be recognised for all his hard work helping people in the local community.”

Heineken UK corporate affairs director James Crampton, who attended the event, said: “We’ve been long-standing supporters of Pub is The Hub in their efforts to improve community services and activities in local pubs. With 2,500 pubs across the UK, we also understand the important role that pubs have in bringing communities together and in tackling loneliness, and over the last five years we’ve helped thousands of people through our Brewing Good Cheer Campaign.”

He adds: “Licensees such as Barrie have such a vital role to play in their communities and it’s been fantastic to celebrate his efforts today with The Prince of Wales at the Ponthir House Inn.”

The village store at the Ponthir House Inn sells essentials such as milk, bread, fruit and vegetables and it has proved such a success that the publican also has plans to launch a delivery service to help many vulnerable people within the village. There is also a small seating area outside the pub where people in the community can now meet and socialise over a coffee.