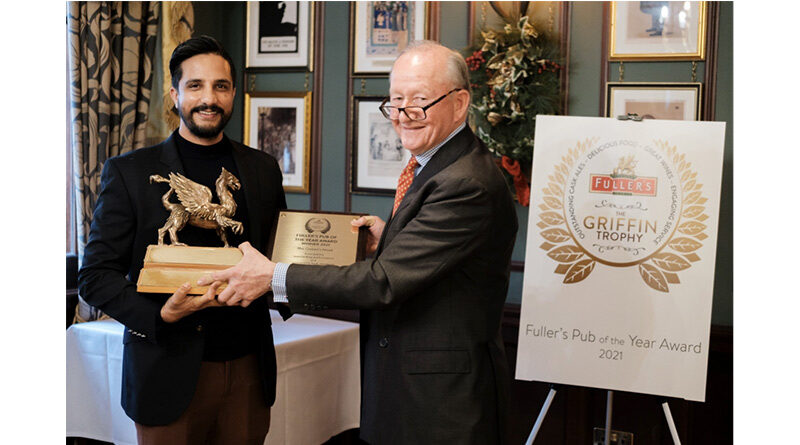 The Queen’s Head in Dorking run by Manu Bhatt, has been named the winner of this year’s Griffin Trophy – the annual Pub of the Year competition from Fuller, Smith and Turner. The Griffin Trophy is open to all Fuller’s 210 Managed Pubs and Hotels and 174 Tenanted Inns and, as well as the title, the winning licensee receives a £5,000 holiday voucher, a staff party to celebrate with their team, and the coveted Griffin Trophy itself.

The Queen’s Head is part of Fuller’s Tenanted Inns estate – and is run by Manu as his own business. He has injected his personality throughout, and it is an eclectic mix of fabulous British pub and influences from Manu’s varied career working in hospitality across the globe.

Following an extensive selection process, the eight finalists of The Griffin Trophy were all visited by Chairman Michael Turner, Chief Executive Simon Emeny, and Marketing Director Jane Jones to choose the category and overall winners. The Queen’s Head was named winner of the Best Town/Local category as well as taking the overall title.

Michael Turner said: “Manu Bhatt is a highly entrepreneurial and creative operator and his experience from his travels really comes through at The Queen’s Head. It’s been a tough time to be running a hospitality business during the last 20 months – but Manu has not only ridden out this turbulent period – he’s exited the pandemic in a fantastically strong position.

“Outdoor dining has grown in popularity – and Manu has invested £70,000 in covering his garden, which is on quite an incline, with a giant tepee – almost trebling the number of covers he can serve from his tiny kitchen. It is this sort of ingenuity that makes Manu an outstanding winner of The Griffin Trophy.”

Manu Bhatt said: “I’m absolutely delighted. I’ve only been at The Queen’s Head since February 2020 and I think the best is yet to come. I’ve got so many ideas yet to put into place – and winning this award has inspired me to continue to innovate and build this great pub even further. I know that there are very few people who have won The Griffin Trophy more than once – but I intend to try and do exactly that.

“There’s something for everyone at The Queen’s Head – from the amazing menu and exciting events catering for big nights out, to tranquil corners and the wonderful garden for those that just want a quiet pint. You just can’t beat a fantastic pub and to be recognised for being exactly that is truly wonderful. Thank you Fuller’s.”