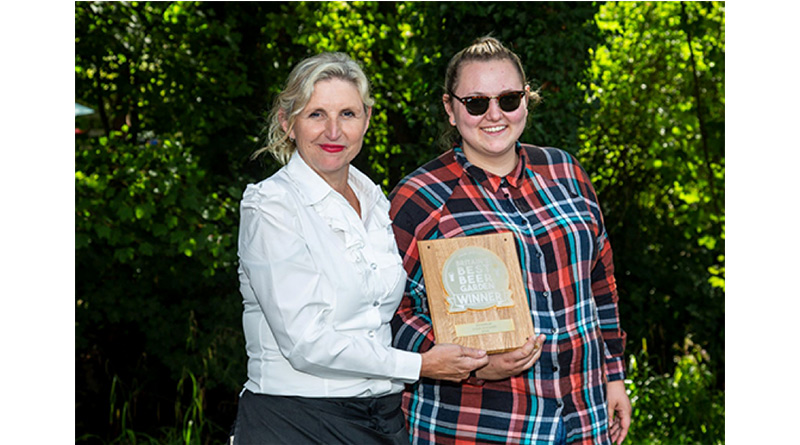 The Rising Sun – in Pensford, Somerset – has won the title of Britain’s Best Beer Garden. Owned by St Austell Brewery, the watering hole is renowned for its idyllic setting, large riverside garden and views over Pensford viaduct and the weir.

The pub was nominated when independent national radio station, Union JACK, launched a competition earlier this month – it went on to reach the final top 10. The overall winner was decided by a public vote and more than 2,000 votes were cast in less than a week. The Rising Sun, which has been run by Lisa Faulkner and Becca Fricker since 2019, received almost a fifth of the overall votes.

As well as winning the title, The Rising Sun also hosted a day of live radio broadcasts this week, which saw Union JACK airing some of its flagship shows from the beer garden. The day’s entertainment included the ‘Not-in-a-Pub Pub Quiz’, hosted by renowned TV quizzer Mark “The Beast” Labbett from ITV’s The Chase.

Joint tenant, Lisa Faulkner said: “We feel honoured to be named Britain’s Best Beer Garden. Thank you to the Union JACK team and everybody who took the time to vote for us.

“Our beer garden has a stunning backdrop of the viaduct and weir, so we feel lucky to operate a pub in such a beautiful location. We currently have an outdoor bar too, ensuring that all social distancing rules can be adhered to, while our guests soak up the views.”

Steve Worrall, Managing Director of St Austell Brewery’s pubs, inns and hotels said: “Congratulations to Becca and Lisa on such a superb achievement. The fact that it was voted for by the public is testament to the popularity of the pub and what a great outdoor space they’ve created for their locals and visitors. Well deserved!”