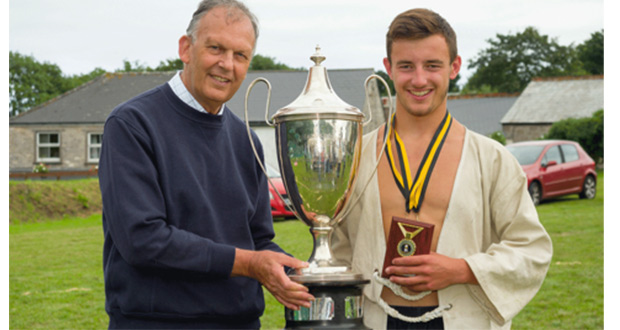 This August, wrestlers from across Cornwall will gather at the Kings Arms field in St Stephen to compete for the chance to be named Cornish ‘wrasslin’ Champion 2019.

Taking place on Saturday August 17th, spectators and competitors will be treated to a full bill of wrestling laid on for the afternoon by the Cornish Wrestling Association.

Newcomers and experienced wrestlers alike are invited to come along and compete.

The St. Stephen tournament starts at 2pm behind the Kings Arms Inn in the Kings Arms Field with medals being contested in children’s Under-10s, Under-12s, Under-14s, Under-16s and Under-18s competitions while an adult Open category will take place alongside the light heavyweight battle (maximum weight 15 stones). The Walter Hicks Cup which was launched in1926 was named after our founder father who wanted to promote the ‘Advancement of Cornish Wrestling’ across the county.

The Cornish style of wrestling – or ‘wrasslin’ – dates back over two thousand years, and at the famous meeting between King Henry VIII and Francis I in 1520 at the Field of the Cloth of Gold in France, a team of Cornish wrestlers faced the champions of France.

The Cornish Wrestling Association (CWA) was established in 1923 to formalise the many local rule differences in the sport and the CWA banner is based on a design carried by Cornishmen into the Battle of Agincourt in 1415, depicting two wrestlers in a ‘hitch’. The modern version features the wrestler’s motto “Gwary whek yu gwary tek” (Good play is fair play).

Piers Thompson, External Relations Director and great-great-grandson of Walter Hicks said, “St Austell Brewery has a long history of supporting our national sport, the tournament is a great day out where you can enjoy watching a traditional Cornish sport, you can also throw your hat in the ring and take part if you’re feeling brave!”

In the 1920’s under the leadership of the CWA, much work was put into a revival of the sport, as witnessed by the British Pathe News team at a tournament in St Austell in 1926 www.youtube.com/watch?v=pzXvTQIr6kQ