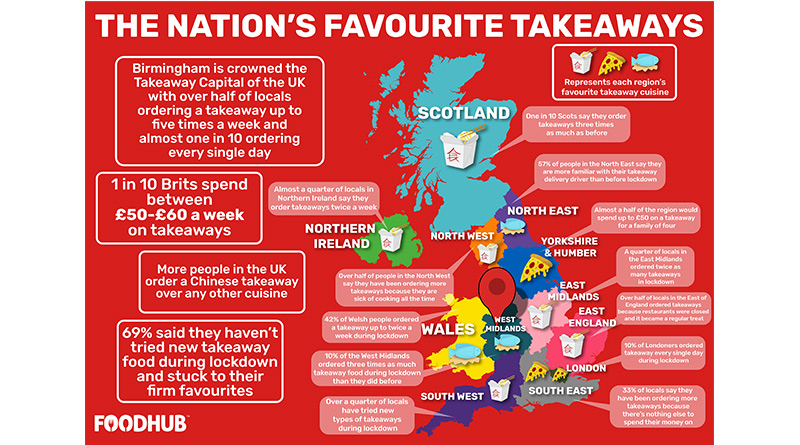 The city of Birmingham has been declared the lockdown takeaway capital of the UK, after new research revealed Brummies ordered more takeaways than any other city in the UK.

The nationwide study by Foodhub, one of the UK’s leading takeaway delivery apps, reveals almost one in 10 people in the city ordered takeaway food every single day during lockdown, while over half ordered a takeaway 2 – 5 times a week in the same 12-month period.

Pizza and fish & chips were the most popular takeaway dishes in the city with 15% of the vote each, with curry following closely behind with 12%.

Foodhub polled 2,000 British adults to assess the takeaway habits of the nation during lockdown.

Nationally, the most popular takeaway ordered during lockdown was Chinese food with 16% opting to order the cuisine over other dishes. Pizza came in second place with 15% of the votes, followed by the classic English dish – fish & chips.

Curry missed out on a top three status, with only one in 10 people classing it as their favourite takeaway, a surprising result as Chicken Tikka Masala has been regarded as a British favourite among takeaway fans for years.

Lockdown saw takeaway sales soar with a quarter of Brits ordering up to twice as much takeaway food then they did prior to the pandemic, with a third of the UK ordering a takeaway meal at least once or twice a week, the research reveals.

Over half of the UK (52%) said they ordered more takeaways during lockdown because they were sick of cooking, and 35% said they had nothing else to spend their money on as restaurants, bars and shops were closed due to national restrictions.

“In fact, as a nation, we ordered so much takeaway food during the last year that many of us (42%) are now on first name terms with our delivery drivers.

“When it comes to ordering a food feast, customers clearly like to stick to their favourite takeaway treats – almost three quarters of people (69%) said they haven’t tried new takeaway cuisines during lockdown and just stayed with ordering what they know and love.”

Residents in Aberdeen enjoy a takeaway meal so much that over one in 10 locals order one twice a day.

When it comes to takeaway favourites, over a quarter (26%) of 18 – 24-year-olds would choose to order a pizza above all other meals and one in five 45 – 54-year-olds would opt for a Chinese to tickle their taste buds.

TOP 10 UK CITIES WHO ORDERED THE MOST TAKEAWAYS DURING LOCKDOWN