Struggling jobseekers are pinning their hopes on getting work in the hospitality, beauty and retail sectors, as vacancies start to appear in industries expected to unlock soon, according to new research by job site Indeed.

A year on from the first UK lockdown, job opportunities in the parts of the economy hardest hit by the pandemic, including in hospitality and food, remain almost 70% down on pre-pandemic levels1, but there are signs postings are picking up in areas that the Government roadmap suggests will reopen soon.

The early evidence is that announcements of the UK’s roadmaps out of lockdown prompted employers to post more new jobs as they readied themselves to reopen. The sectors chosen to unlock first are among those seeing the largest growth in new postings.

Postings for sport jobs have risen by 44%, ahead of outdoor sports resuming in England from March 29, while beauty and wellness roles have increased by 39% and education and instruction jobs are up by 27%. 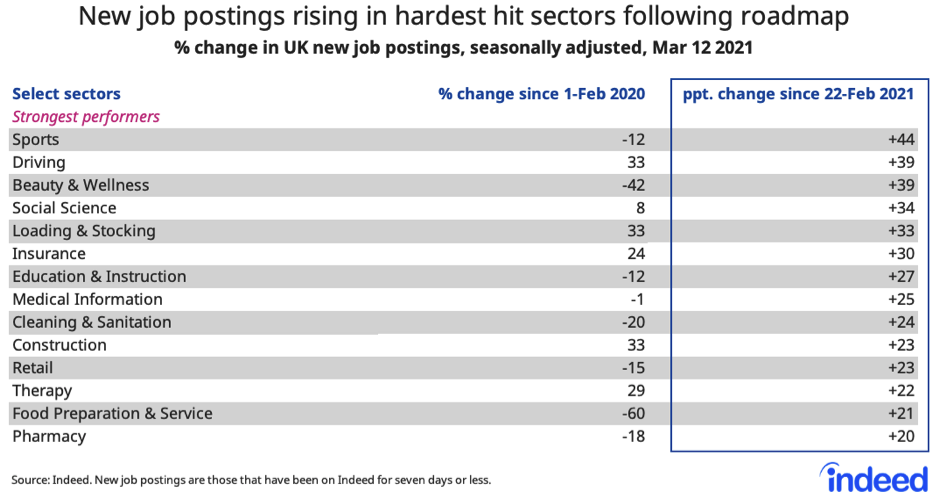 Jobseeker interest has started to grow in sectors which are set to reopen in the coming weeks and months.

Interest in bar and waitressing jobs has grown by 98% and 60% respectively in the past two weeks, making them two of the top three fastest-rising search terms on the Indeed platform. Pubs and restaurants are scheduled to begin opening, albeit only outdoors, from April 12 in England and April 26 in Scotland.

There is also surging interest from jobseekers in beauty therapist and hairdressing roles, and jobs in retail and gyms, which are expected to reopen on April 12 in England and Wales, and from April 5 in Scotland.

Simultaneously, interest in jobs which were a lifeline for jobseekers during the depths of the pandemic, such as in supermarkets, warehouses and delivery driving, are seeing interest falling fastest. Interest in delivery driver roles has fallen by 13% in the past fortnight alone, while demand for supermarket jobs is down 11%. 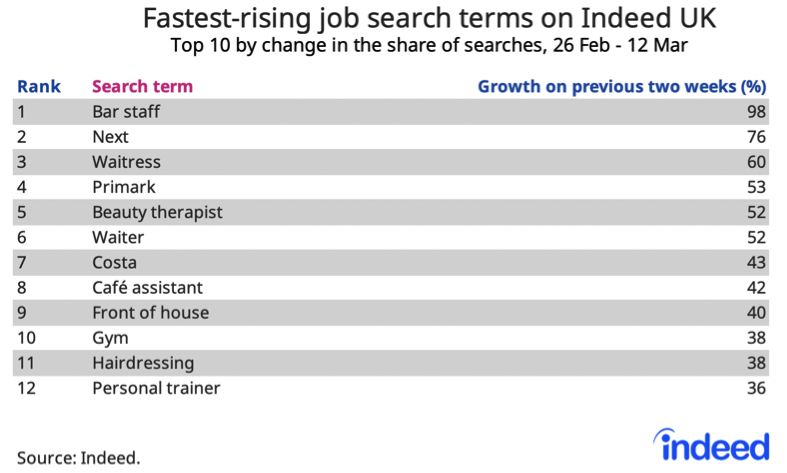 Despite the promising increase in job postings, many jobseekers will still face stiff competition. The sectors seeing the biggest jump in interest from candidates are those that require few formal qualifications, such as customer service, administration and retail. However, job postings remain much scarcer in these sectors than before the pandemic raising the possibility of a squeeze for available jobs.

However, there remain areas of the labour market which are not being flooded with applicants. Sectors requiring high qualifications, such as software development, healthcare and engineering, still receive relatively few clicks per posting and roles remain relatively difficult to fill.

“Roadmaps out of lockdown and the success of the vaccine rollout are building optimism that the labour market will bounce back, as the release of lockdown unleashes pent-up demand for jobs in the hardest-hit sectors, including beauty, gyms, retail and hospitality.

“Although consumer-facing businesses are hoping sales will be brisk immediately after lockdown restrictions ease, particularly to people who have managed to save money during the pandemic, employers will need to find ways to sustain this demand.

“The pandemic has accelerated the trend towards flexible work, and office-based workers may return to the workplace less frequently, which will impact consumer-facing businesses in cities that rely heavily on commuter footfall. It also remains unclear when restrictions on international travel will end, meaning businesses that rely on tourism will need to appeal to UK customers more than usual.”