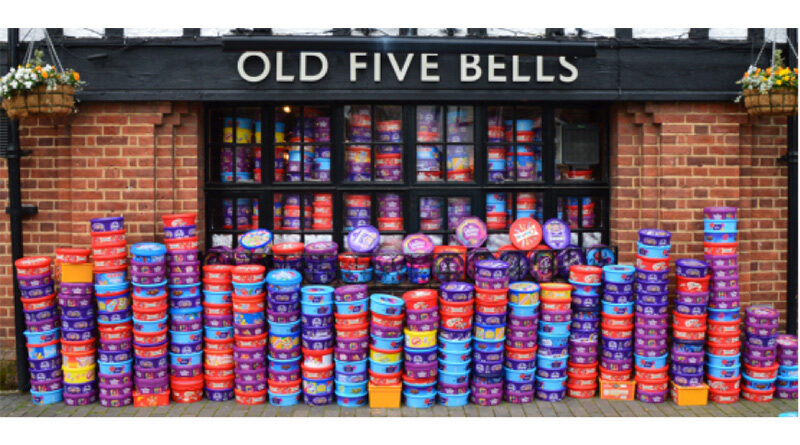 Greene King is again this year partnering with two specialist recycling businesses to turn hard-to-recycle plastic into much needed cash for Macmillan Cancer Support and is calling on the public to participate.

Tens of millions of tubs containing chocolates, sweets and biscuits are sold in the UK each year, with the majority sold during the Christmas period. These tubs are typically made from polypropylene; a hard plastic that is not always accepted by local authorities for recycling, resulting in it, instead, being incinerated or landfilled.

Consumers and businesses are being encouraged to drop off their used plastic confectionery and biscuit tubs at any of Greene King’s managed pubs, restaurants and hotels across the UK. The tubs will be taken to a specialist recycling facility and processed into granulated recycled plastic. Each tub equates to approximately eight pence and money is raised by selling the recycled plastics, with the profit going to Greene King’s charity partner, Macmillan Cancer Support.

Greene King is partnering with co-cre8; specialists in creating solutions for hard-to-recycle materials and responsible for attracting large businesses to support the campaign and DCW Polymers, which will use its high-tech plastic reprocessing plant to shred and granulate the tubs ready for sale to manufacturers, in place of virgin plastic.

Vance Fairman-Smith, Greene King’s supply chain director, said: “We’re really pleased to be able to provide this recycling service to our local communities across the country. This is a ‘win win’ situation as we look to save the plastic tubs going to landfill and at the same time being able to support our national charity partner, Macmillan.”

“This is a great way of not just helping charity but also the environment”, says Peter Goodwin, co-cre8’s Co-founder.

“This year, we really expect the campaign to take off with as many 1,700 Greene King pubs getting behind it. Clearly, last year’s campaign was greatly impacted due to COVID restrictions, and yet despite the fact that all pubs were closed, more than five thousand tubs were collected,”, said Peter.

Greene King will be accepting tubs during the whole of January 2022. To check whether tubs are suitable for participating in the scheme look for the symbol, below, stamped into the outside base of the tub.