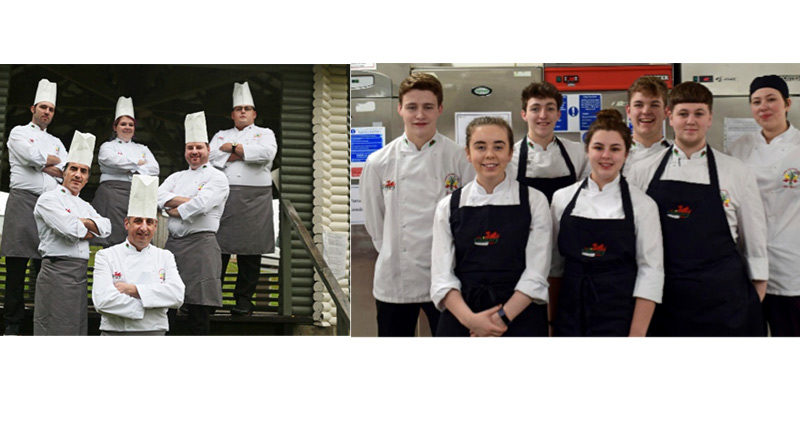 Two well prepared teams of chefs will be flying the Welsh flag as they take on the best in the world at the prestigious IKA Culinary Olympics in Stuttgart next month.

The senior and junior teams will join around 2,000 chefs and pastry chefs from more than 60 nations at the biggest and oldest international culinary art exhibition from February 14 to 19.

Senior Culinary Team Wales will be led by Nick Davies, culinary craft trainer with Cambrian Training, Welshpool, who combines the roles of team manager and member whilst Sergio Cinotti, from the award-winning Gemelli Restaurant, Newport, takes over the captaincy for the first time.

The senior team has held four events to run through the dishes it will cook for the Restaurant of Nations – one element of the competition – at the Culinary Olympics. The chefs complete preparations with a sold-out dinner at Cobra Rugby Club on January 17.

The team met on January 2 to run through its chef’s edible buffet, a new element introduced for the Culinary Olympics and will complete last minute fine tuning at a final training session on February 3.

“Our Restaurant of Nations menu is looking and tasting good and we are perfecting the chef’s edible buffet, which is being introduced for the first time at the Culinary Olympics.”

The talented young chefs complete their Restaurant of Nations menu run through with a lunch at Grŵp Llandrillo Menai, Rhos-on-Sea on Tuesday, January 28. They put the final touches to their dishes and the chef’s edible buffet at a training bootcamp this week.

Both manager and coach are pleased with the young team’s progress and are looking to the final practice dinner to fine tune the chefs ready for the Culinary Olympics. Most of the chefs are aged between 19 and 21.

“Alys competed with the senior team at the Culinary World Cup in November 2018 and two members went as commis chefs to gain experience,” said Michael. “The junior team is better prepared that we have ever been.

“Our Restaurant of Nations menu is packed with flavour and requires lots of different skills from the chefs. With 50 per cent of the hot kitchen marks awarded for flavour, we are hoping to score well for taste.

“The main course is braised Jacob’s Ladder and a small fillet of Welsh Beef, which seems to be working well with the people who have tasted it.

“Danny is working on the menus and has introduced some elements of the dishes that helped him to win the Northern Europe heat of the Global Chef Challenge.

“We are finalising the chef’s edible buffet, which has 12 courses, including canapes, terrines, a hot rabbit dish and a dessert.”