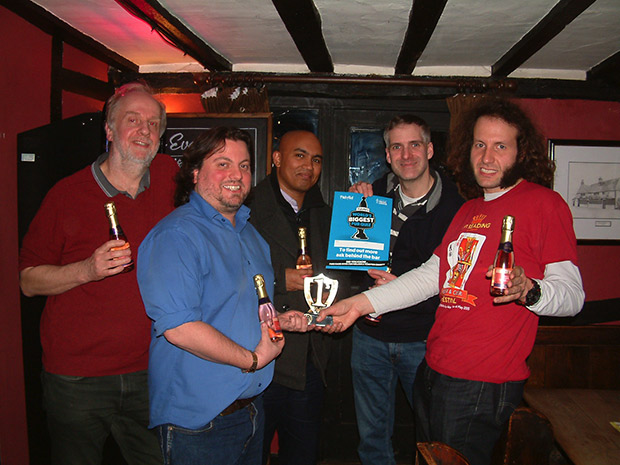 At the King's Arms, Dorking, ‘Mark's Men' won The World's Biggest Pub Quiz 2019.
The World’s Biggest Pub Quiz, organised by PubAid in March this year, has raised more than £230,000* for hundreds of charities, including over £94,000 for Prostate Cancer UK, the event’s official charity partner.

Co-founder of PubAid, Des O’Flanagan, commented: “We’re delighted with this impressive total raised by the quiz, which we know will be put to good use by the wide range of charities and worthy causes it benefits.

“The substantial increase in the average amount raised per pub is welcome and we think it shows that, after four years, the quiz has become a popular fixture on many pubs’ calendars, something that licensees and their customers look forward to every year. It meant that this year, more publicans were promoting the quiz, attracting more quizzers and often adding additional fundraising activities like bingo or raffles, to increase the amount raised on the night.

“The quiz not only raises money, but also shines a spotlight on the great work that pubs do for charity. More than £100 million is raised by pubs every year, an incredible amount which reflects their vital role at the heart of their local communities.”

He added: “We are grateful to every pub, pub company and brewer who supported this year’s quiz, and also to our charity partner since 2017, Prostate Cancer UK; they have driven the quiz with huge professionalism and enthusiasm and have undoubtedly helped to raise its profile over the last three years.”

Jon Eserin, Associate Director of Fundraising at Prostate Cancer UK, said: “It’s been brilliant to watch the World’s Biggest Pub Quiz grow over the past three years and we feel lucky to have been able to play a part in that as PubAid’s official charity partner. We are extremely grateful to all the venues who have chosen to support Prostate Cancer UK this year and who have raised funds that will help stop prostate cancer being a killer.

“As well as helping us to raise an incredible amount of money, our partnership with PubAid has allowed us to reach men and raise awareness of a disease which kills one man every 45 minutes. We thank PubAid for their ongoing support and look forward to seeing the World’s Biggest Pub Quiz grow from strength to strength.”

Based on a post-event survey of 94 participating venues

An estimated 1,438 pubs ran for the quiz this year
91% of licensees liked this year’s quiz questions and 74% liked the promotional posters
50% of participating pubs also ran a raffle on the night, and 17% held another type of fundraising activity
The most popular night to hold the quiz was on the Sunday (19%), followed by Thursday (18%)
22% of pubs asked for questions to be made easier, while 6% asked for them to be harder
70% of pubs who took part are ‘definitely’ planning to run the quiz again in 2020 and a further 24% are ‘likely’ to repeat it.

*Total number of pubs who have reported monies raised (986) plus an estimated 452 pubs who have not yet reported the sum they raised, multiplied by the average gift (£160).