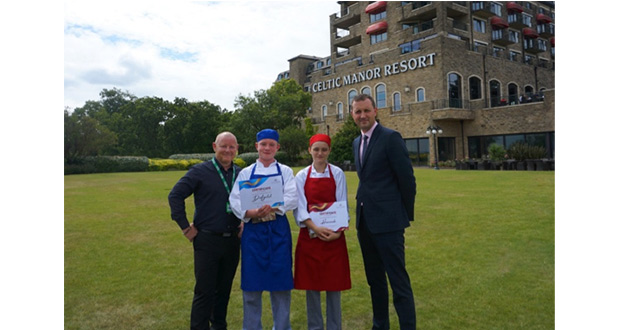 Young chefs at Celtic Manor Resort battled it out in a cook-off to feed their colleagues as part of celebrations to mark National Hospitality Apprenticeship Week.

Hannah Payne, 19, and Dafydd Scott, 17, set up rival red and blue kitchens in the staff canteen at the five-star hotel and vied for the taste buds of almost 500 fellow staff members during lunch service.

In the end, Hannah’s menu of chicken tikka curry with naan bread just edged out Dafydd’s meatballs in tomato sauce with penne pasta and garlic bread to win the cook-off competition by just three votes.

Hannah’s prize was a pair of tickets to the Wales v Ireland rugby international on 31st August, kindly donated by Cambrian Training, one of the resort’s key apprenticeship providers.

Hannah said: “I’ve learnt so much in my 10 months as an apprentice at Celtic Manor and it was great fun to put some of my training into practice and play a more leadership role in delivering the menu and service.

“It was a close-run thing against Dafydd and I think he sold out his dessert so he probably won that part, but I got a lot of great comments about my curry.”

The cook-off was one of a number of activities organised by Celtic Manor’s Learning and Development team to celebrate National Hospitality Apprenticeship Week.

Dafydd is one of three apprentices who has featured on short video clips explaining their training on Celtic Manor’s social media channels. In all, the resort currently has 103 members of staff on a wide variety of apprenticeship courses ranging from business administration and golf retail to digital marketing and sports turf.

Celtic Manor Resort Head of Learning and Development Tracy Israel said: “Apprenticeships are a very important part of the training we deliver here at Celtic Manor and National Hospitality Apprenticeship Week gave us a fantastic opportunity to celebrate our existing employees who are gaining their apprenticeship qualifications with us, and also to showcase some of what we offer to potential employees.

“Apprenticeships are a key pillar of our talent management route to grow our own managers of the future and we want to invest in our staff to not only grow our own business but also to grow them personally to succeed within the industry in general, and help fill a definite skills shortage we have within hospitality.