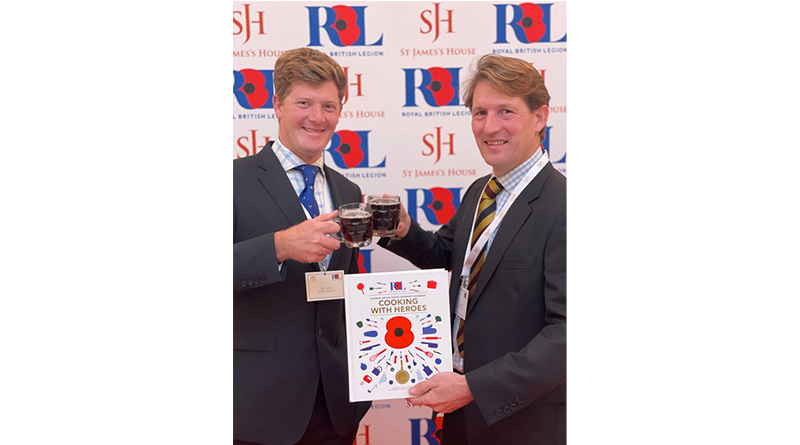 To celebrate the centenary of The Royal British Legion, celebrity chefs have teamed up with acting or former members of the military to create a unique cookbook.

Cooking With Heroes: The Royal British Legion Centenary Cookbook was launched recently at Claridge’s, London and as an official sponsor of the cookbook, Arkell’s Brewery showcased at the event.

Written by serving military personnel and veterans, and supported in its creation by organisations like Arkell’s, this beautifully designed hardback book is a unique way of highlighting the contribution made by the Royal British Legion and by the British Armed Forces over the years.

It marks the centenary by celebrating 100 regions around the world in which the RBL has operated. Each region is represented by an authentic and delicious recipe particular to that part of the world, as well as a profile of a regional hero whose valour, conduct and commitment deserves to be remembered.

Established in 1921, the RBL is the UK’s largest Armed Forces charity. Best known for organising the annual Poppy Appeal and Remembrance Day services, the RBL works to support current and ex-service personnel as well as their families.

With a list of family military connections that can be dated back all the way from current Chairman, James Arkell’s great-great-great-grandfather who joined the Second Wiltshire Rifle Corps in 1888, to his son John, who served in Afghanistan, the brewery’s editorial contribution in the cookbook highlights the strong connection to the military that the Arkell family has had for 150 years.

“We have beer and military service running through the family veins,” says James Arkell, “and the brewery are delighted to support this commemorative fund-raising cookbook.”

At the launch the brewery showcased its latest seasonal beer ‘Contemptibles’; a mild ale perfect for Autumn, brewed using chocolate malt for the dark colour, which also adds warm roasted and sweet tones, with a light hop aroma to compliment.

Featuring on the pump clip design are Noel Arkell’s sons James & Peter who fought in World War 2. This brew honours the Armed Forces.

The book is available online via the link below or from Arkell’s Grape & Grain Wine & Brewery Warehouse.