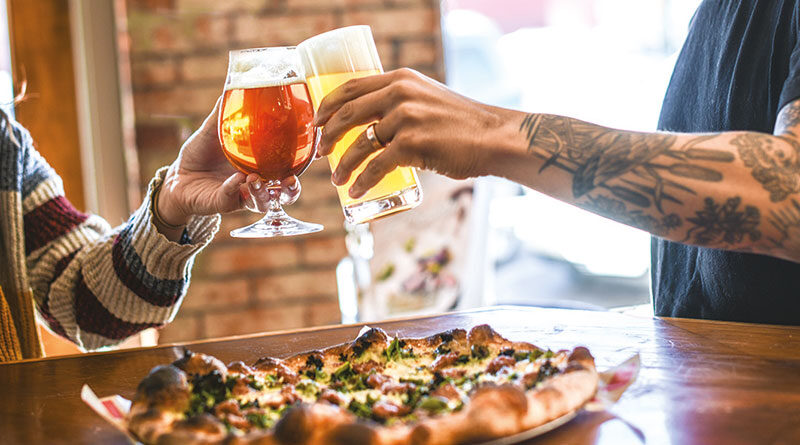 Pairing American craft beer with food is far more prevalent in the USA than the UK. From the casual bar to the fine dining restaurant, beer is often the beverage of choice to accompany a meal. Many venues list beer pairing suggestions alongside food dishes and may also have a separate and extensive beer list.

American is a nation of beer lovers! Prestigious, high demand, one-off beer and food pairing events take place regularly drawing huge interest from across America, and further afield. Carefully curated multi-course beer pairing events are also commonplace. According to a Nielsen survey, 71% of craft beer purchases in the States gave ‘complements my meal’ as a very or somewhat important selection criteria in their beer choice when at a bar or brewpub while nearly half of craft beer drinkers in the States say they drink beer with food always or often, 63% of people select beer based on what they’re going to eat and 88% enjoy a beer with their meal at least sometimes.

But why is America more advanced than the UK when it comes to beer and food pairings? Maybe the UK is too entrenched in its ‘pie and pint’ mentality or maybe it’s simply that American chefs have realised that beer has a wider flavour spectrum than almost any other beverage and can accompany almost any food partner.

Pairing American craft beer with food can elevate both to a whole new level. Here are a few tips to consider:
i) Match strength with strength. Pair delicate dishes with lighter craft beers and strongly flavoured dishes with intense, more assertive beer styles

ii) Think of beer as one of the flavour components of a dish, the only difference being it’s in a glass not on the plate!

iii) Use the dominant flavour or ingredient in a dish as the starting point. Hops are very food-friendly and will go with just about any food.

iv) Consider what cooking methods and techniques to use because this affects the end result. Grilling, roasting, smoking and baking when done at high temperatures will accentuate the beer’s malt flavours, while braising or frying adds fat that will coast the palate and protect against the ‘bite’ of the alcohol

v) Hops can mimic the flavours of herbs and spices. Hops with herbal, spicy, pine, citrus, tropical, fruity or woody flavour notes will complement similar herbs and spices used in the dish

vi) Avoid incorporating American craft beer within a recipe because the cooking process drives off the flavour, and depending on the beer in use, may enhance bitterness. There are exceptions, of course, such as mussels in a smooth witbier or a beef casserole using stout, but pairing a beer with a dish allows the diner to taste all the flavours in both the food the beer.

Foods with spice, heat, acid and complex flavours are a great way to showcase and utilise certain beer styles. Hops can calm heat and spice, carbonation can cleanse the palate and malt in beer balances acidity on the palate.

The Brewers Association, the not-for-profit trade organisation for small and independent American craft brewers, recently demonstrated beer’s compatibility with food by hosting an American craft beer and food pairing initiative at Westminster Kingsway Catering College in Victoria, London targeting students to stimulate understanding and trial of beer pairings at an early stage in their careers, in order to arm them with knowledge and experience as they progress through their professional careers.

The event consisted of a four-course beer and food paired menu devised, cooked and served by third year students, under the leadership of the Brewers Association’s Executive Chef and renowned beer pairing expert, Adam Dulye.