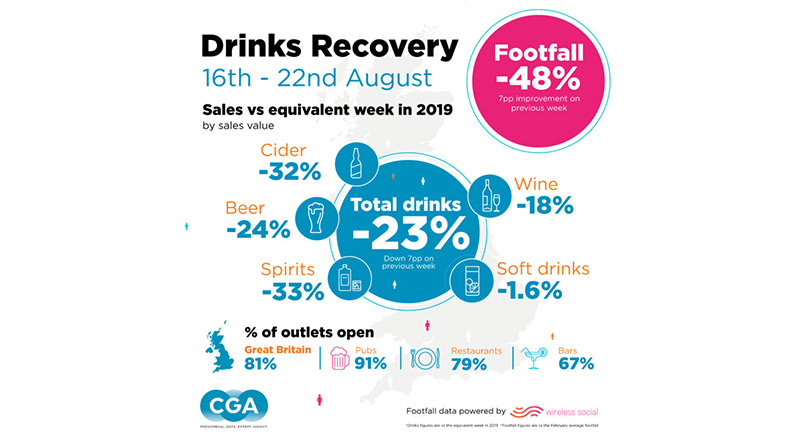 Cool weather held down drinks sales in the on-trade last week, but the Eat Out to Help Out scheme gave another boost to soft drinks and wine.

Those are among the messages in CGA’s latest Drinks Recovery Tracker, which shows that drinks sales by value in the seven days to Saturday (22 August) were 23% down on the same week in 2019. It compares to a 16% deficit in sales over the previous week.

With the Eat Out to Help Out offer in its third week, drinks sales were up 12% and 14% last Monday and Tuesday, but dropped 3% on Wednesday. As some consumers switched their on-trade visits to take advantage of the 50% discount, drinks sales fell substantially year-on-year on Thursday (down 20%) and Friday (down 36%).

Eat Out to Help Out continues to benefit the soft drinks market, where year-on-year sales were down just 2% over the week. The lower temperatures contributed to 24% and 32% drops in beer and cider sales respectively. But with more people eating out, wine had its best week since the on-trade started to reopen in early July, with sales down 18% year-on-year.

Data from CGA’s Outlet Index meanwhile shows that four in five (81%) of Britain’s licensed premises were back trading by last Saturday. The figure is 19 percentage points higher than the 62% of premises that were open in late July, according to the Market Recovery Monitor from CGA and AlixPartners. It suggests the Eat Out to Help Out scheme has encouraged many venues to reopen and capitalise on the lift to food sales.

It appears to have had a galvanising effect in London, where the number of sites trading is now in line with the national average at 80%, after lagging behind for several weeks. In Scotland and Wales, where restrictions were lifted later than in England, 76% and 79% of premises are open respectively.

Footfall data from Wireless Social shows Eat Out to Help Out encouraged more people to visit town and city centres last week. While footfall was 48% down on the weekly average in February, this is an increase of seven percentage points and the best result since the start of lockdown.

The sun shined on the on-trade in the first half of August, but the cooler weather made trading tougher for the drinks sector last week,” says Jonathan Jones, CGA’s Director of Client Services. “However, it was still the second best week of sales since hospitality reopened, and steady increases in the number of sites trading and footfall in towns and cities are both positive signs for the weeks ahead. We can expect many more bumps along the road to recovery, but as more people are tempted out they will hopefully become more confident about their safety and in their spending.”