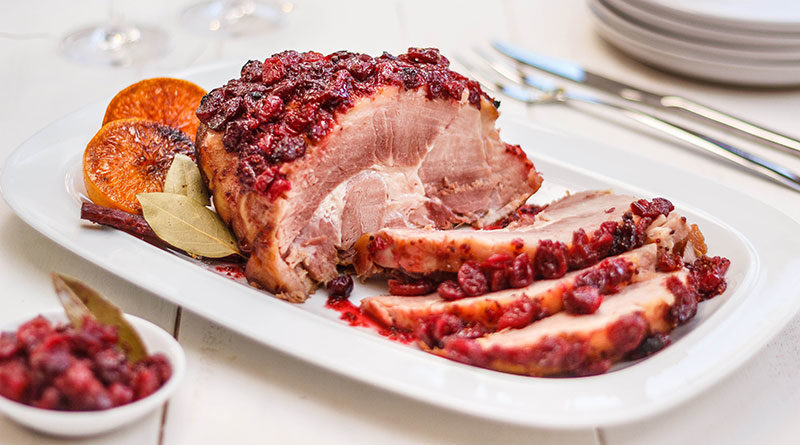 A classic Christmas recipe but this version maximises the festive flavours for minimal input. Rather than boiling the gammon then baking it, this recipe slow cooks in the oven which results in beautifully succulent ham and less washing up. Topped with cranberries, spices, maple and orange it really is maximum Christmas.

1. Heat the oven to 160C/140C fan. Put the ham into a snuggly fitting oven dish and pour over the cider or apple juice. Top up with water until the pan is half full. Add the spices and bay leaf to the liquid and cover the whole thing tightly with two layers of non-stick foil. Put in the oven and bake for 4 hours.
2. After 2 hours carefully check the liquid level and add a little water if there’s less than half of the liquid remaining.
3. While the gammon is cooking make the glaze. Put all of the glaze ingredients into a saucepan and simmer gently for 10-15 minutes until the mixture becomes thick. Set aside.
4. After 4 hours remove the ham from the oven and carefully remove the foil and pour away the liquid.
5. Turn the oven up to 200C/180C.
6. When the ham is cool enough to handle, cut away the skin leaving a layer of fat. Score slashes into the fat to create a diamond pattern.
7. Discard the whole spices from the glaze then spoon and spread half of it over the ham. Return to the oven for 20 minutes or until the outside of the ham is sizzling. Serve, with the remaining sauce, as part of a buffet, main meal or sandwiches.

Note: This method of cooking will produce a meltingly succulent ham so don’t worry of it doesn’t cut into perfect slices, it’s just as easy to serve it pulled into chunks and pieces.

Recipe and images courtesy of www.berryworld.com