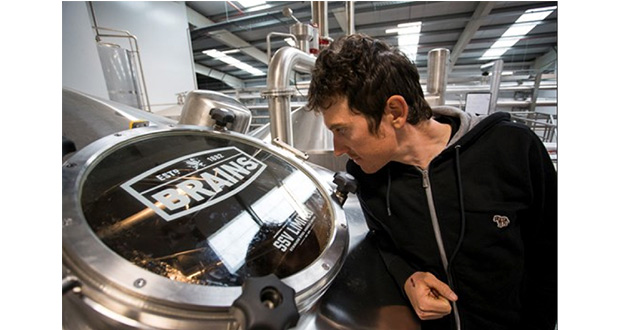 He may have won the Tour de France, been voted BBC Sports Personality of the Year, won two Olympic gold medals and a Commonwealth gold but Geraint Thomas has finally achieved the ultimate honour in brewing his very own beer in partnership with Brains Brewery!

Geraint was closely involved in the development of the beer which is a light refreshing ale (4.0% abv) with crisp citrus flavours designed to quench the thirst of the keenest cyclist or indeed armchair cycling fan. The beer has an especially light golden colour inspired by the famous yellow jersey and features a picture of Geraint in action in last year’s Tour complete with his iconic white sunglasses and yellow jersey.

Commenting on the new beer Geraint said “I couldn’t quite believe it when Brains approached me with the concept of brewing the beer. I’m Cardiff born & bred, and Brains is part of both Cardiff’s and Wales’ identify, so I was incredibly proud when they asked me to get involved. It’s been a real eye opener, and a lot of fun getting involved with the development of the beer, and of course the tasting…it’s a tough job but somebody has to do it! I’m delighted with the result and am already looking forward to sinking a pint or two at my local Brains pub once the Tour is over!”