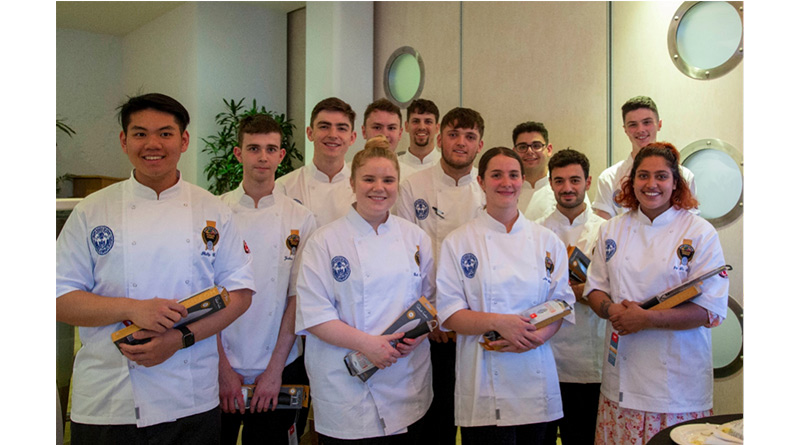 Yesterday chefs cooked their hearts out in the final exam of the Graduate Awards which took place at the University of West London. Despite the pandemic, the Craft Guild of Chefs has remained determined to provide young chefs with the opportunity to develop their culinary ability and showcase their talent. The Kitchen and Pastry Graduate Awards provide chefs with an opportunity to work on classic skills alongside their professional careers. Regarded as an exam, not a competition, chefs are working to achieve the pass mark rather than compete against each other.

The prestigious title of Highest Achiever in the Kitchen exam was awarded to George Baldwin-Edie who now has the chance to be part of The Young National Chef of the Year competition in 2022. Beth Disley-Jones was the Pastry Highest Achiever and along with George will experience a two-day education trip to France courtesy of Grande Cuisine. They will visit the Bocuse market, a chocolatier and Michelin starred restaurants.

During the Kitchen exam the chefs had to complete a written test, prepare a best end of lamb into cutlets and a three-bone rack, fillet and skin two whole Dover soles and present as fillets, create a dish with a mystery basket of ingredients as well as follow a classical recipe and make a crème caramel for dessert.

For the first time ever, the final exam included a dedicated mentor who was on hand throughout the cooking tasks to support chefs. Former Graduate Awards achiever, Connor Godfrey took on this role and this is something the Guild hopes to continue as part of its mission to guide young chefs, both physically and mentally, as the industry bounces back.

Founder of the Graduate Awards, Steve Munkley who is Vice-President of the Craft Guild of Chefs said: “This group of finalists have really come together in this process and supported each other during the challenges of 2021. That’s what being a good chef is all about; working as a team, giving and taking advice and learning from each other. Despite the fact we couldn’t hold our annual mentor trip, we have ensured the Graduate Awards finalists felt supported by our committee through video demonstrations, online meetings and a dedicated WhatsApp group. Congratulations to the five chefs who achieved the pass mark today. I really hope those who didn’t quite make it have learnt a lot, absorb all the feedback and join us again next year.”

Commenting on the Graduate Awards pastry exam, Chair of Pastry Examiners, Will Torrent commented: “It’s never easy competing in a new kitchen especially coming out of the year we have just had which has created so much uncertainty. However, Beth worked really calmly under pressure and created some delicious products. I really want to highlight the need for young pastry chefs, chocolatiers and bakers to enter next year’s award because you are the future. The skills, experience and opportunities you will receive through the Graduate Awards provide a great springboard for your career.”

Russell Bateman, head chef at The Falcon Hotel, Castle Ashby added: “It’s always an honour to be chair of examiners at this event. The Graduate Awards are extremely highly regarded in the UK culinary scene and the chefs who have achieved this award today now have a fantastic accolade to add to their CV. The standard throughout was excellent across all three courses and there has been a real positivity in the kitchen. This is never an easy exam, it’s not designed to be, but just completing the process helps a chef to grow their skills. I am already looking forward to next year, for the 20th anniversary of the Graduate Awards, when hopefully things will be much more normal in the hospitality industry.”