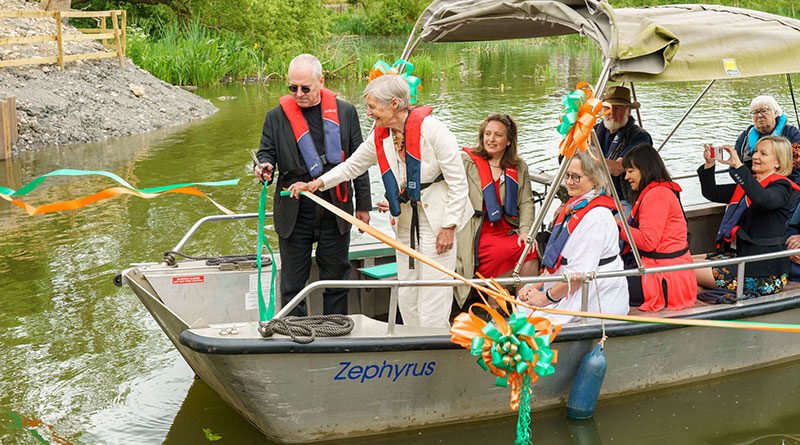 A hotel in Gloucestershire hosted the much-anticipated opening event of the new Ocean Jubilee Bridge in Stonehouse – a project that ensured the restoration of Stonehouse and Stroud as canal towns once again following 50 years of separation.

Stonehouse Court Hotel, a 17th-century manor house located directly adjacent to the iconic bridge, was chosen as the venue to celebrate the opening event, which took place on Monday, May 23rd.

The historic Stonehouse and Stroud Valley hotel celebrated the long-awaited canal regeneration which is expected to drastically increase tourism and leisure for the Stroud district while educating people about the build and natural heritage of the Stroud valleys.

Following the restoration, both locals and visitors alike will once again be able to use the canal path as a prime source of exercise to boost physical and mental wellbeing – with joggers, walkers, cyclists and dog-owners able to enjoy the flat, well-constructed and attractive route that runs continuously from Ocean to Brimscombe.

The success of the project means people of all ages and all cross sections of the community can mingle in harmony as they enjoy the newly created tranquil and attractive corridor through Stroud.

Furthermore, the restoration will help with job creation and provide a boost to the economy across the local community and surrounding district thanks to the fruition of the ambitious project – with tourists able to come and enjoy a new facet to the town.

Sarah Brewster, Director at Stonehouse Court, said: “The event was an overwhelming success! We’re absolutely delighted and feel incredibly fortunate to have hosted such a historic event for the local region. To finally have 12 miles of canal restored in the Stroud District area is a monumental milestone for the community. We feel so fortunate that our guests and other members of the local community will once again be able to enjoy unrestricted access to the wonders of Stroud’s Five Valleys.”

Stonehouse Court also served as host to mark the 50th anniversary of the Cotswold Canals Trust – which is the team of volunteers charged with heading up the ambitious project, and who strive to protect the heritage of the Stroud districts while also improving the local environment.

The Cotswold Canals Trust has been working to open up a stretch of waterway from Thrupp to Stonehouse, with the original rail bridge being removed in 1968 when British Rail deemed it too expensive to repair following damages to its abutments. It was replaced with an embankment which blocked the canal, with just a small culvert for the canal water and a pedestrian tunnel left behind.

In addition, the previous bridge was too small to allow boats to pass under, so the completion of the project was a vital step to link the Stroudwater Navigation Canal to the national waterway network – making Stonehouse and Stroud canal towns once again after 54 years of separation.