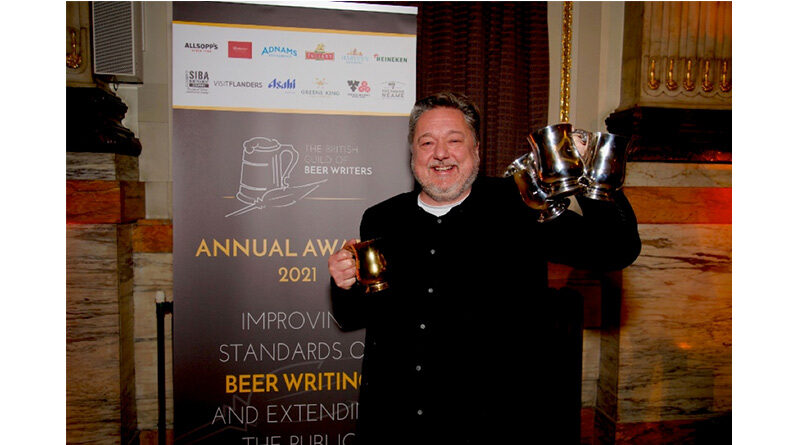 Author Pete Brown has been named Beer Writer of the Year 2021 at the British Guild of Beer Writers’ annual awards ceremony, staged on 2 December in London. Brown has now won the top award four times, following triumphs in 2016, 2012 and 2009.

Beer Writer of the Year is the top accolade in the Guild’s annual competition for writing about beer and pubs, which this year received more than 150 entries across 13 categories. On his way to the main prize, Brown won the Gold award in three categories: Best Writing about Pubs, Best Online Communicator and Best Book about Beer or Pubs, for Beer By Design. This year’s highest-ever prize fund of £17,000 was shared between 16 Gold and Silver award winners.

Brown is a London-based author, journalist and broadcaster specialising in food and drink. He has written 12 books which take in social history, cultural commentary and travel writing. He writes for newspapers and magazines around the world, and has contributed to BBC Radio 4’s Food Programme. In addition to his success in the Guild Awards, Brown has won three Fortnum & Mason Food & Drink Awards.

Emma Inch, Chair of the Guild and of this year’s Awards judging, said: “Pete is a worthy Beer Writer of the Year. He has a talent for finding interesting nuggets in whatever he’s writing about, and turning them into stories that don’t just appeal to beer geeks, but pull in a wider audience. His work is always meticulously researched, but also accessible and great fun to read.

“The standard of entries across all categories was, as ever, extremely high and judges had a tough task choosing the winners and runners up. We were impressed by the levels of knowledge, energy and passion that shone through the works submitted by our finalists, whether they had written a column, published a book or produced a film.

“Everyone who received an award or a commendation should be extremely proud; they really are the cream of British beer writing in 2021 and we wish them all success in their future career communicating about beer and pubs.”

The Brewer of the Year title, sponsored by SIBA, was presented to John Hatch of Ram Brewery, who gathered the highest number of votes in a poll of Guild members.
Presenting the Award, Inch said: “John has deservedly won enormous respect across the brewing sector and this was reflected in our poll. According to one of the Guild members who nominated John, he “single handedly managed to keep the continuation of brewing on Wandsworth’s Young’s Brewery site.”