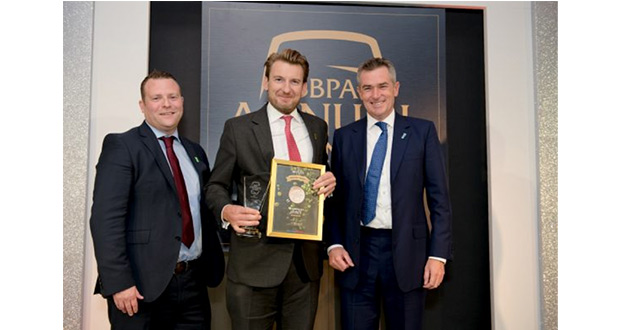 Brakspear took the top prize ahead of serious competition from other pub operators across the country, with judges praising its programme of support designed to give its pubs standout in a competitive market. Advice and help on business development and marketing, an interior design service and a range of initiatives including the unique beers from the Bell Street Brewery and the popular Henley Ale Trail, were all cited – with a special mention for the Brakspear socks offered with beer purchases earlier this year.

Collecting the Pub Champion trophy at an awards ceremony in London, Brakspear chief executive Tom Davies said: “We’re thrilled to have won this award. We’re a small team at the Henley head office and everyone there works hard to help our landlords and landladies build successful pubs.

“It’s about giving customers good reasons to visit their local Brakspear pub rather than a competitor, whether it’s a beer that they can’t buy elsewhere – often supporting a local charity or good cause – or a free pair of socks. We’re delighted that our efforts to support our pubs in this way have been recognised as the best in the industry.”

Brigid Simmonds, chief executive of the BBPA, said: “Many congratulations to Brakspear on winning the Pub Champion Award this year. Our Annual Awards serve to highlight the continued achievements of brewers and pubs and we are very proud of what they do.”