The State Funeral of Her Majesty The Queen will take place today September 19 at Westminster Abbey beginning at 1100hrs.

The Service will pay tribute to The Queen’s remarkable reign and lifetime of service as Head of State, Nation and Commonwealth. 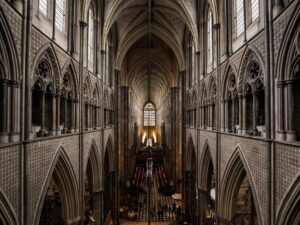 The State Funeral will be led by the Dean of Westminster, the Very Reverend Dr David Hoyle, and the Sermon will be given by the Archbishop of Canterbury, the Most Reverend and Right Honourable Justin Welby. The Choirs of Westminster Abbey and His Majesty’s Chapel Royal, St James’s Palace, under the direction of James O’Donnell, Organist and Master of the Choristers of Westminster Abbey will sing.

Before the Service, the Abbey’s Tenor Bell will be tolled once a minute for 96 minutes, one toll for each year of The Queen’s life. Holders of The George Cross, Victoria Cross, and Representatives of the Orders of Chivalry will Process through the Abbey before the Service.

l and the Dean of Windsor.

At the start of the Service, as The Queen’s Coffin is carried into the Abbey, the Sentences will be sung by The Choir of Westminster Abbey from the Nave. The five Sentences, which are lines of scripture set to music, have been used at every State Funeral since the early part of the 18th century.

The Choir of Westminster Abbey

will be joined by the Choir of the Chapel Royal, St James’s Palace, for the final two Sentences. The Dean of Westminster will give The Bidding, before the first hymn. The Right Honourable Baroness Scotland, Secretary-General of the Commonwealth, will read the first Lesson.

composed by the Master of The King’s Music, Judith Weir, ‘Like as the hart’, will be sung by the Choir. The piece, inspired by Her Majesty’s unwavering Christian faith, is a setting of Psalm 42 to music and will be sung unaccompanied.

The Second Lesson, read by the Right Honourable Elizabeth Truss MP, Prime Minister, will be followed by the hymn, ‘The Lord’s my shepherd’. The hymn was also sung at the wedding of the then Princess Elizabeth and Lieutenant Philip Mountbatten, in 1947. Following the Sermon, the Choir will sing the Anthem, ‘My soul, there is a country’, set by Hubert Parry; an Anthem of great hope.

Prayers will be said from the High Altar, before the Choir sings a short anthem, ‘O Taste and see how gracious the Lord is’, which was composed by Ralph Vaughan Williams for The Queen’s Coronation in 1953. The Archbishop of Canterbury will give the Co

The Dean of Westminster will pronounce the Blessing. The Last Post will be sounded by the State Trumpeters of the Household Cavalry from the ste

ps of the Lady Chapel. Two minutes’ silence will then be observed across the United Kingdom. The Reveille will be sounded by the State Trumpeters, before the Congregation sings the National Anthem, ‘God Save The King’.

At the conclusion of the State Funeral, The Sovereign’s Piper of the Royal Regiment of Scotland will play the traditional Lament, ‘Sleep, dearie, sleep’.

The Queen’s Coffin will be borne in Procession out of Westminster Abbey, returning to the Gun Carriage for the Procession to Wellington Arch, Hyde Park Corner, before travelling to Windsor for the Committal Service in St George’s Chapel.

Afterwards, the bells of Westmin

ster Abbey will be rung, fully muffled, as is the tradition following the Funeral of the Sovereign.