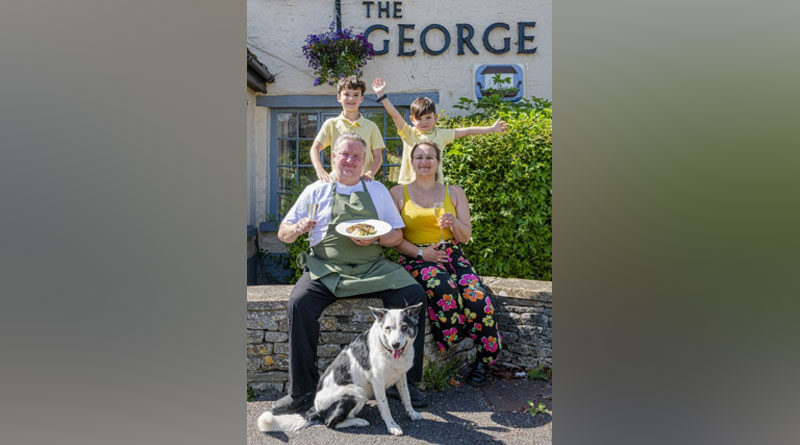 An award-winning husband and wife team have taken over The George at Kempsford, a pub that has been with Arkell’s Brewery since 1861.

Chef Roger Hawkshaw and front of house, Emie Hawkshaw, their two children, and Mojo the old farm border collie took over the pub in March and with the brewery’s help did a full kitchen refurb which is now complete and Roger can be let loose in the kitchen with some of his signature dishes as well as his take on pub classics.

The George Inn is one Arkell’s Brewery’s oldest hostelries, bought by brewery founder Thomas Arkell in 1861 for the princely mortgage of £350. An article sits on the wall of the famous Wiltshire pub detailing its past owners and in reference to the Arkell’s mortgage it states that those party to the agreement were, amongst others, a veterinary surgeon from Meysey Hampton, a shopkeeper a local yeoman, and the famous brewer himself – Thomas, from Swindon.

Roger and Emie have moved from The Winterbourne in Winterbourne Bassett, a successful community pub. Roger has worked under the likes of Chris Tanner and at one Michelin starred New Angel where he was sous chef to John Burton-Race. Since then, he has gone on alone to pick up two AA Rosettes and further Michelin recognition. Emie has worked in customer facing roles for over 18 years, ranging from managing a bespoke retail operation to Michelin and three Rosette restaurants.

The lure of The George and village life was too much, she said. “Both of our boys have been enrolled into the great local school and we are enjoying meeting so many of the locals, it is a lovely place to live and bring up a family.”

Roger echoed Emie’s thoughts and said:
“We open for the week on a Tuesday night where we serve ‘Bits and Pizzas,’ something we started when we had no kitchen. Then for the rest of the week we have a dedicated lunch and evening menu, which has gone down really well so far, I am able to change it on a regular basis to keep it fresh for the locals and those that come to visit.”