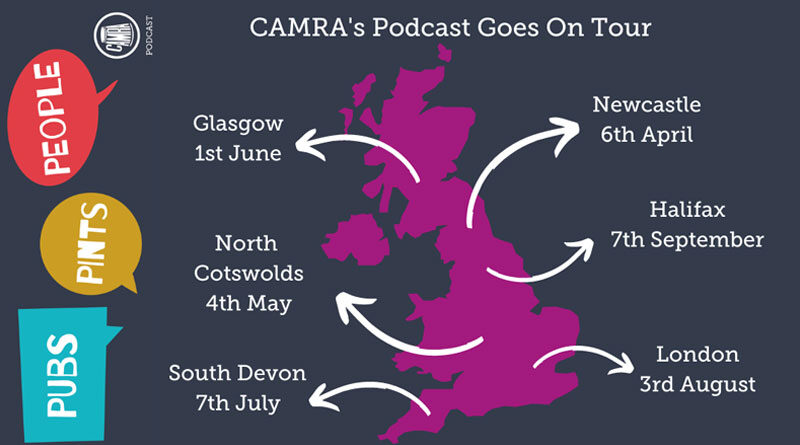 The Campaign for Real Ale’s popular podcast Pubs. Pints. People. has kicked off a new season by shining a spotlight on Newcastle ahead of the local Newcastle Beer & Cider Festival.

Episode 1 of the new season airs today (6 April) looking at “what’s in a bottle (or can)?”. The hosts sit down with award-winning beer writer Adrian Tierney-Jones to discuss his new title United Kingdom of Beer, which identifies 250 of the best beers available in bottles and cans across the British Isles.

The hosts also sit down with local CAMRA volunteer Martin Ellis, a regular contributor to BEER Magazine and a beer, brewery and pubs writer. He leads regular walking tours visiting Ouseburn’s breweries and tells listeners how the Tyneside has become one of the premier beer destinations across the UK.

Ellis says: “I have seen Tyneside transformed from a real ale desert to a real ale mecca. The Ouseburn, just outside Newcastle city centre, has possibly the greatest concentration of micro-breweries in the country.”

Martin is also joined on the programme by Anthony McMullen, organiser of the Newcastle Beer & Cider Festival who talks through what it’s like to kick start the local festival after a two-year hiatus.

McMullen says: “It’s an exciting time to be running a beer festival, showcasing the talent of our local breweries and those further afield. It’s great to be able to once again get together, make new friends, watch amazing live entertainment and drink great ale, cider and perry.”
Admission to the Newcastle Beer & Cider Festival is free for CAMRA members and £3 for all other visitors. The festival boasts over 100 beers, 40 ciders, a gin bar, music and food and will be located on the first floor of Northumbria Student’s Union from 6 to 9 April.
The podcast, which covers a range of topics and issues relating to beer, cider, pubs, clubs and more, has essentially gone “on tour” this season, travelling around the country to shine a spotlight on local CAMRA branches and their activity.

Listeners can expect a new episode to air on the first Wednesday of each month from April to September.

Podcast producer Katie Wiles says: “The CAMRA podcast has been a huge success since we launched during the first Covid-19 lockdown in April 2020. Now in its third year and operating in an incredibly different environment, we want to travel the country to highlight that our local festivals are back and shine a spotlight on the fantastic work of our local branches in furthering the cause of great beer and pubs across the UK.”

New episodes will air on the first Wednesday of every month and can be accessed through Apple Podcast, Spotify or Acast.
To find out more and tune in visit https://camra.org.uk/podcast or visit us on Twitter and Facebook.