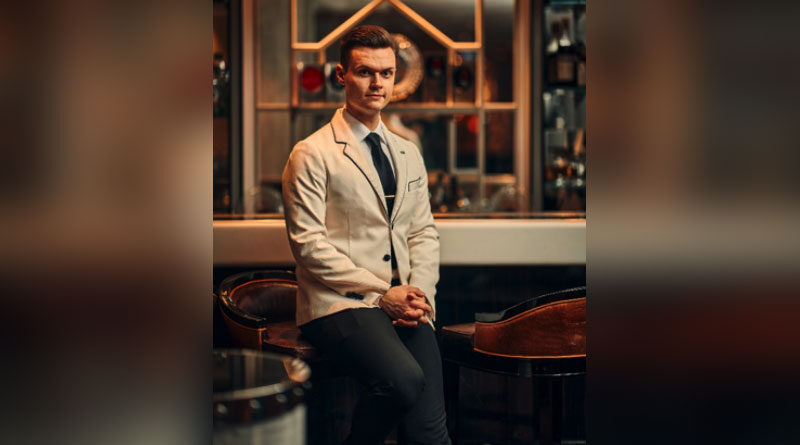 The UKBG is delighted to announce the winner of their latest competition, held in partnership with the JSS (the Japan Sake and Shochu Maker’s Association), a tournament to discover the most innovative and creative recipes featuring beverages from the new Japanese categories of Honkaku Shochu and Awamori.

After an overwhelming response to the launch, eight competitors from across the UK gathered in the luxurious, 5-star hotel setting of The Londoner on Monday, 14th March to compete for the and a trip to Japan.

Congratulations go to Oliver Eardley of The Savoy, London with his recipe, ‘A Grain of Memory’. Oliver’s recipe truly captured the spirit of the competition, as well as embodying important aspects of sustainability. As well as creating an incredible drink, Oliver on average scored highly in technical execution, drink appearance, as well as storytelling and service skills. Oliver wins himself a career development trip to Japan, as well as his first bartending title!

Our judges had the following comments:

“A great ability to create a whole new and intriguing texture with amazake really stood out for me.”
Andy Collinson (Beebolin & WFA Co-Founder)

“A beautiful example of how to successfully integrate distinct Japanese ingredients. Definitely one to watch for the future.”
Miho Komatsu (Sake & Shochu Educator, JSS Academy Graduate)

“This recipe represented the simplicity and elegance that I wanted to see from a cocktail that is meant to embody the spirit of Japan. Well done, Oliver!”
Rei Yoshitake (JSS in the UK Representative)

“The drink had a lot of character, very well balanced and overall was a very intelligent cocktail, with Awamori at its heart. Oliver is definitely mastering the art of the bartending competition.”
Peter Dorelli (Former President, UKBG)

Congratulations must also go to the following runners up, Matteo Basso of The Malt London Bar & Lounge (2nd place) with ‘Golden Secret’, and Hyppolite Civins of Quaglino’s (3rd place) with ‘Man’Naka’.

Our digital broadcast reached our membership over 400 viewers globally, while we welcomed a number of industry guests to our intimate setting, in the wonderful surroundings of the Londoner Hotel, one of the city’s first luxury boutique hotels.

The UKBG’s new competition format follows the success of the National Cocktail Competition – whereby online seminars are followed by in-person competitions. The UKBG’s aim is to spread knowledge and learning, through fostering healthy competition and community.

Alongside Dean Callan of the Bartenders Broadcasting Network, the initial seminar, ‘Honkaku Shochu and Awamori – Japan’s Beautiful Secrets’, welcomed the highly decorated New York barman, and JSS Global Ambassador, Don Lee, to lead a 2-hour masterclass with nearly 100 members, covering everything from Japanese culture to the finer technical details of brewing and flavour profiles, touching on important issues such as appropriation and cultural reciprocity and respect.

Our final really brought together many traditions of culinary and bar experience, blending British, European and Japanese flavour concepts.The JSS is delighted with their new Global Ambassador, and the UKBG is very proud to have been a part of that journey.