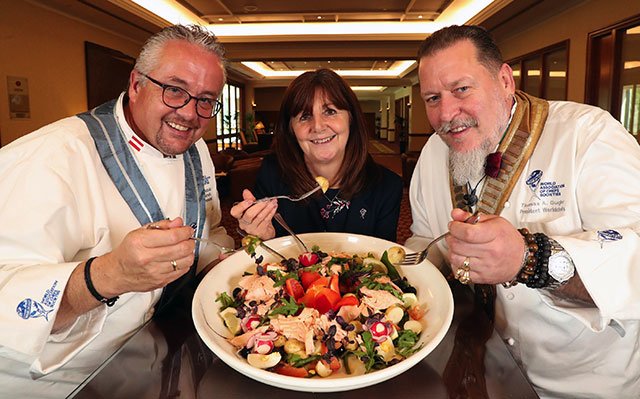 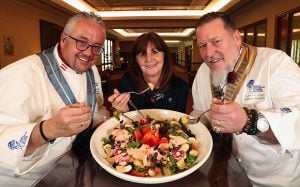 The president of Worldchefs, an organisation that represents more than 12 million chefs from 108 countries around the globe, has encouraged Wales to bid to host the Worldchefs Congress and Expo in 2024.

Thomas Gugler, who represents Saudi Arabia, made the comment at a three-day Worldchefs board meeting at the Celtic Manor Resort, Newport, which began on Monday. The chefs were welcomed to Wales by Minister for Environment, Energy and Rural Affairs, Lesley Griffiths, AM.

“I think it’s a good idea,” said Mr Gugler when asked about Wales’ congress bid. “Certainly, they must make sure that they meet all the criteria, but the venue looks fantastic. It has the infrastructure, the space, the modern technology and the ability to expand.”

He praised the hospitality and food at the Celtic Manor Resort: “There is a really good atmosphere here and the food we have had was amazing, which showed the dedication of the chefs. I think the resort has a great future, with lots of things to come.”

The Worldchefs Congress attracts up to 1,000 chefs from around the globe and its associated Expo exhibition attracts between 5,000 and 10,000 visitors.

Mr Gugler and the Worldchefs’ board are currently holding a three-day meeting at the Celtic Manor Resort where they yesterday received a presentation about the new £84 million ICC Wales, which is due to open on September 13.

A joint venture between the Celtic Manor Resort and the Welsh Government, ICC Wales will have space for 5,000 delegates. Facilities include 4,000 sq ft of pillar free space in the main hall, a 1,500-seat auditorium and 12 break-out rooms set over three floors.

“Bidding for the Worldchefs Congress is a complex procedure, but we wanted to show you what we have here and get advice about how we can push the bid forward,” he told the board. “Why not have a small country like Wales hosting the congress?”

Arwyn Watkins, OBE, CAW president, told the chefs: “We firmly believe that we have the infrastructure in place for Wales to host the congress. We are adopting a Team Wales approach to make sure we tick all the right boxes.

“If Wales is selected as one of the three bids to be put to the vote, it will be for us to lobby other countries to get them on board.”

Minister Mrs Griffiths welcomed the Worldchefs board to Wales. She said Welsh food and drink products were now world renowned for their quality and the industry was on target to grow by 30 per cent to £7 billion by next year.

She revealed that a biennial Taste Wales ‘speed-dating” event held by the Welsh Government at the Celtic Manor Resort this year attracted 130 Welsh food and drink producers and 110 international buyers.