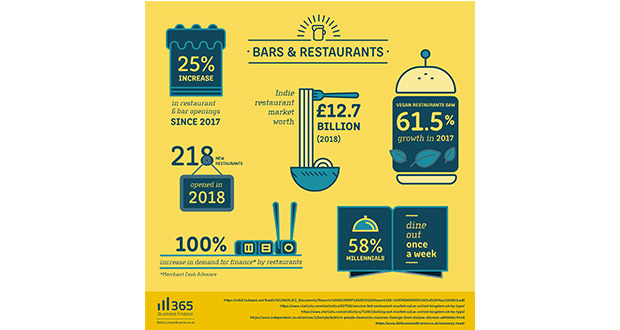 Restaurants, bars cafes and tearooms have been the fastest growing retail sectors in the UK over the past three years. These retailers have consistently experienced the highest number of net store openings in 2016, 2017 and 2018, according to the Local Data Company.

Cafes and tearooms are the fourth most popular retail sector, restaurants and bars the fifth, regarding new outlets launched during the last three years. Key stats include:

Putting this all into context, 365 Business Finance has created a virtual high street, Recovery Road, to demonstrate the changing face of the retail industry in the UK.

By reviewing statistics on the five fastest growing retail categories, the reasons why they have taken a foothold despite the difficult climate become apparent. Recovery Road acts as an interactive guide, showing how British retail and the high street has the potential to evolve with independent businesses at the helm.