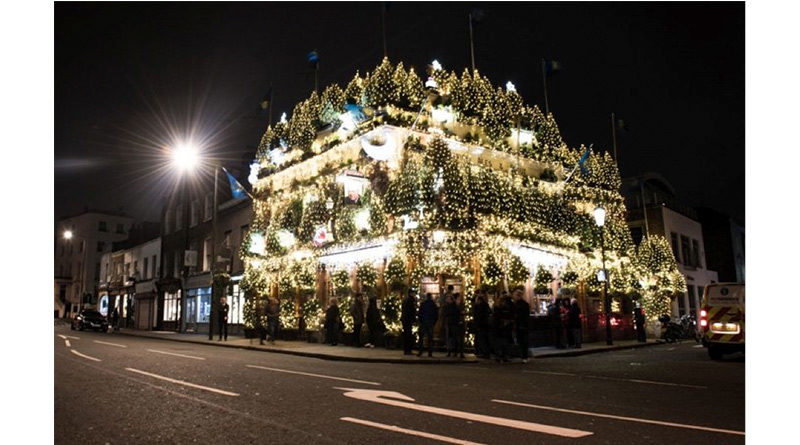 Widely known as London’s most festive pub, The Churchill Arms near Notting Hill Gate tube station is in a class of its own when it comes to decking the halls.

On Twitter, the pub was said to be “like the Coca-Cola truck. When you see it, you know Christmas is on its way”.

Each year, the dedicated decorators take three weeks to transform the Kensington pub into a Christmas spectacle. The festive tradition began 28 years ago with just 10 trees, and from then more were added each year.

Last year saw the pub’s outer edges lined with 97 Christmas trees and 21,500 lights. This year Manager James Keogh topped that with a record-breaking 100 trees and 22,500 lights. Although the lights had been illuminating down the road since the end of November, the official switch on took place on Thursday 5 December.

At ten minutes to six, James instructed all the customers in the pub to step outside. Crowds filled the street, surrounding the pub from all corners. After counting down from ten, the lights switched on with a cheer and the street lit up. It really was a sight to feast your eyes on. Before the crowd filtered back indoors, James insisted everyone sang the traditional carol ‘White Christmas’.

The night continued and the pub was packed with festive cheer. The smell of mulled wine filled the air and customers were spontaneously breaking into carols. The interior was also covered from wall to ceiling in old pub memorabilia, flowers and of course, more trees and lights.

The Churchill Arms will stay illuminated until the first week in January, so make sure you pay a visit this festive season.