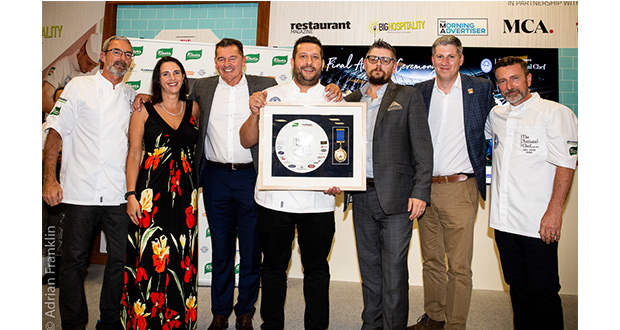 An impressive list of chefs has been whittled down from over 100 to just one as Steve Groves, head chef at Roux at Parliament Square was selected by the UK’s toughest culinary experts to take the title of The National Chef of the Year 2020. However, it was a closely fought battle with ten talented chefs aiming to take the top spot in a live two-hour cook-off at The Restaurant Show.

Chefs had to create three courses in two hours and Steve served up a menu of red mullet, shellfish mousse and bouillabaisse sauce, followed by a main course of suckling pig, Jerusalem artichokes, quince, hazelnut and trompettes with Calvados Baba, honey poached pears and creme fraiche Chantilly for dessert.

Sustainability and seasonality were the key focus points of this year’s brief which was put together by Gary Jones and competition organiser, David Mulcahy. Finalists were tasked with creating a bouillabaisse style flavoured starter using under-utilised fish. For the main course, chefs had to use cuts of suckling pig with the opportunity to pre-cook one element of the pig prior to the competition, ensuring it did not amount to more than 20% of the final dish. Finally, the chefs were asked to create an elegant dessert honouring seasonal pears, which showcased technical skill, balance and maximum flavour impact.

Straight after scoring the dishes, Gary Jones said: “We’ve seen some amazing cooking today. What stood out for me about Steve was his good, strong, clean flavours. He didn’t over complicate his menu and approached the brief well resulting in beautiful flavours. When it came to the main course, he served-up the best crackling in the room and I was salivating just looking at it.”

Knowing he now holds the title of The National Chef of the Year, Steve Groves said: “I am delighted, relieved and surprised. It was hard work and those two hours went by in the blink of an eye but I focused on the flavours of the dish. I am incredibly pleased to win this title and I can’t wait to celebrate with my team, who I couldn’t have done this without.”

Vice-President of the Craft Guild of Chefs, David Mulcahy who has organises the competition added: “What an amazing final we’ve seen today! Firstly, congratulations to Steve Groves who has done an incredible job and now becomes a true ambassador for our industry. When you take this title, it’s about more than what you have cooked today as the chefs who have won previously are still some of the most talked about figures in hospitality. Each year, we make sure that the competition is truly relevant to today’s diners and is addressing industry trends whilst putting all our finalists firmly on the map. It’s known as the hardest culinary competition in the UK which is why this title is so sought-after and the one competition every chef wants to win.”

It’s not just the senior chefs who are in the spotlight to as a new Young National Chef of the Year has also been crowned. William Keeble who is demi chef de partie at Whatley Manor won the competition. In second place was Jordon Powell, chef de partie at South Lodge Hotel and George Harding, senior chef de partie, The Atlantic Hotel took the final place on the podium.

The ten finalists were tasked with creating two different vegetarian or vegan canapes for the starter and a Norwegian cod main course appropriately garnished and served with an emulsified hot, warm or cold sauce. Finally, they served up a plated dessert using a classic Victoria Sponge as a base.