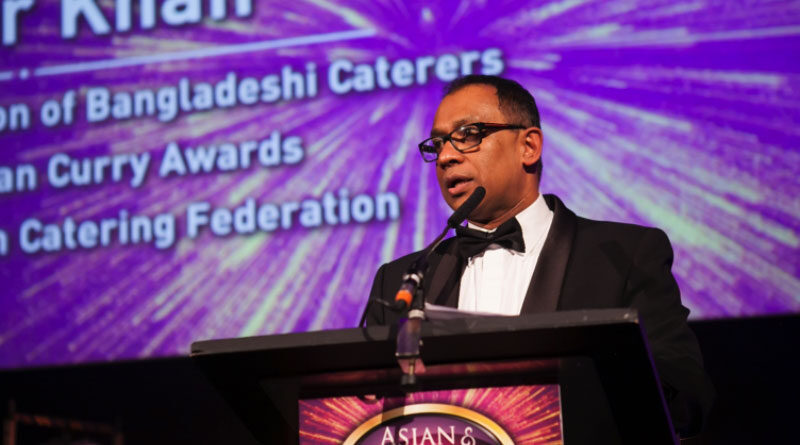 At a glittering gala dinner hosted by BBC news anchor Samantha Simonds, winners at this year’s Asian Restaurant Awards received some of the hospitality sector’s most prestigious accolades – uniquely open to the entire range of Asian cuisines.

Addressing an audience of more than 500 of the country’s leading Asian restaurant owners, chefs and local dignitaries, awards organiser, Yawar Khan, Chairman of the Asian Catering Federation (ACF), spoke the industry’s need to: “Adapt and embrace change, or risk becoming just become another statistic, amid widespread restaurant closures, against ever-rising rising costs, with no Government plan to help alleviate the pain being felt through the hospitality sector.”

Babur in Brockley was named Best Asian Restaurant for London and Sapna Tandoori, Caenarfon won the title for Wales.

Speaking on behalf of the Awards’ judges, restaurant consultant George Shaw admonished some of the previous winners for failing to take maximum advantage of their accolades: “I’ve seen some past winners double their turnover inside two months, after they celebrated their achievement with customers in style, securing coverage on local TV, radio and in newspapers, hitting their marketing database and social media followers and investing wisely in targeted advertising.”

Shaw recounted a recent conversation with a former client, a restaurateur he’d helped some years before with a couple of launches. The owner had called out of the blue asking if he was still alive and involved in the hospitality business, as he was about to complete a purchase on a struggling venue. The restaurant, located in a leafy south London suburb, with no immediate competition, was losing money and the owner was throwing in the towel.

Shaw thought the name of the restaurant sounded familiar. In fact, it had received an award at November’s Asian Curry Awards, also organised by the ACF. But on investigation it transpired that there was no local media coverage of its award in evidence. The restaurant had no social media presence. But worse, there was no mention of the awards on the establishment’s own website.

“Is it any wonder the restaurant was losing money?” Shaw asked the audience,” for many of whom marketing consists of turning the ‘Closed’ sign on their door to ‘Open’.

The full list of regional winners can be viewed at www.AsianRestaurantAwards.org