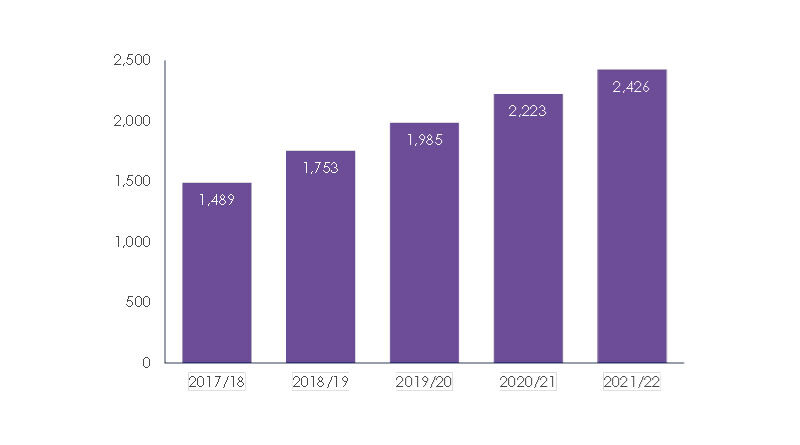 Another 200 new breweries opened in the UK last year, meaning that there are now 2,426 breweries in operation across the UK, shows a new study by UHY Hacker Young, the national accountancy group.

The craft beer industry in the UK has taken off over the past decade with a surge in new independent breweries. Demand from consumers for premium, artisan drinks has led to more entrepreneurs starting their own craft beer businesses. These often aim to follow in the footsteps of brewers like BrewDog and Beavertown that now register tens of millions of pounds per year in sales.

UHY Hacker Young says that the growth in brewery startups has started to slow as the craft beer market becomes increasingly competitive. Growth in the number of breweries, while still impressive at 9.1% in 2021/22*, fell for the third consecutive year (see graph below), having stood at 17.7% in 2018/19.

Some major craft beer brands have gained significant market share after being acquired by brewing majors. This has allowed them to benefit from the large distribution networks of their parent companies and has made it more difficult for smaller brands to gain a foothold in the market.

Camden Town Brewery was bought by AB InBev 2015, while in 2021 Heineken took control of Brixton Brewery after initially investing in the business in 2017. Greenwich-based Meantime has been owned by Asahi Group since 2016.

James Simmonds, Partner at UHY Hacker Young, says:
“It is remarkable that Britain’s craft beer boom is entering its second decade and is still registering significant growth in startups.”

“The attraction of starting a craft brewery still remains for many. However, the challenge of making a success of a startup in the sector is now greater than it was.”

“Some UK brewers that were startups only a few years ago are now major players worldwide. They now have access to distribution in both the on and off trade that younger brewers cannot yet match. Startups can still grow quickly through local and online sales if they have the right product and branding, however.”