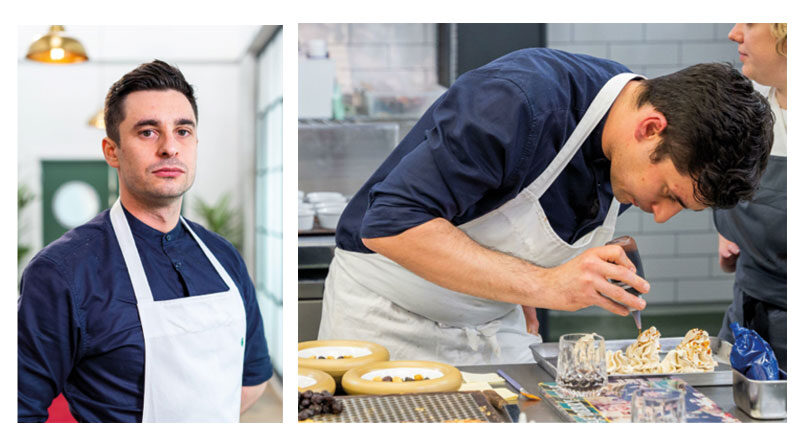 Last night, 31 March, Chris McClurg, Chef de Cuisine at Paul Ainsworth at No6 in Cornwall, made it through to the prestigious Great British Menu banquet. The BBC cookery competition has celebrated 100 years of British broadcasting this year. The event, held at Alexandra Palace, will air tonight (1 April), where the first high definition public television service was transmitted in 1936, and lead the world into the golden age of TV.

The chef from County Down, who previously took part in the competition in 2019, competed for Northern Ireland before winning his heat last week. This week he joined seven other chefs in national finals week and received four tens from the judges for his dessert, before being selected for the banquet.

Chris’ ‘Derry Girls Sherry Trifle’ will be the final dish at the banquet. His dessert celebrates the much loved Northern Irish sitcom, and pays homage to his mother who is from the county and very fond of the pudding. One thing he felt was lacking in a trifle was temperature contrast and he impressed the judges by incorporating a roasted vanilla ice cream and warm chocolate moelleux into the dish. Sherry isn’t produced in Ireland but Chris overcame this by speaking to an old friend from a distillery in his home county. The distillery imports Oloroso sherry casks in which to age their gin and the sherry remnants found in the cask are sweet and strong with notes of raisin, vanilla, tobacco, and roasted nuts – the perfect liquor for a trifle.

ABOUT CHRIS MCCLURG:
Hailing from Hillsborough in Northern Ireland, Chris now lives and works in Padstow, North Cornwall. He has worked with Chef Paul Ainsworth at his eponymous restaurant, Paul Ainsworth at No6, for nearly a decade.
Drawn to the kitchen from a young age, Chris spent three years under the tutelage of Jack O’Shea at his iconic London butchery, honing skills that set him apart from the pack the moment he stepped into the No6 kitchen. Rising through the ranks over the years, he was part of the team that won their Michelin star in 2013, before making Senior Sous Chef in 2014. In 2018 he was named Observer Food Monthly’s Young Chef of the Year, before becoming No6’s Chef de Cuisine one year later. Chris likes to put his modern stamp on the classics and is always experimenting with new dishes to add to the menu.

Catch Chris at the banquet tonight at 7:30pm on BBC Two and iPlayer