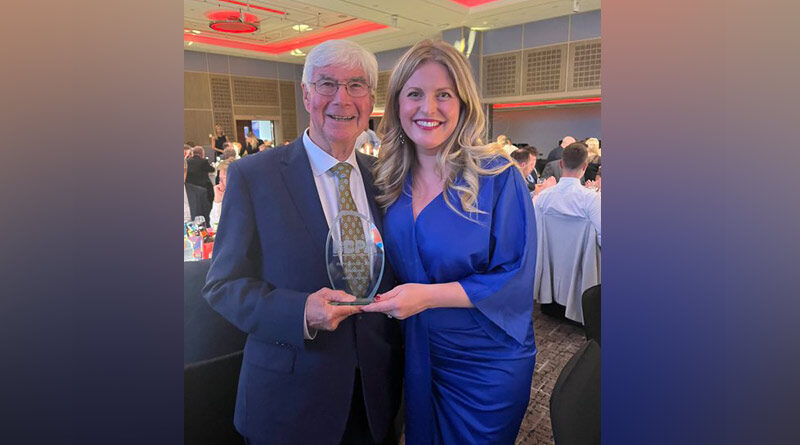 Representatives from across the beer and pub industry joined together this week for the British Beer and Pub Association’s Annual Dinner to celebrate community champions and raise £20k for good causes.

The event, which took place the Leonardo Royal Hotel near Tower Bridge and was sponsored by Sky, was attended by over 300 people from brewing and pub businesses and the organisations that support them, celebrating those who tirelessly support the industry and the communities across the country it serves.

Alongside fundraising £20k for Only A Pavement Away and The Licensed Trade Charity, two awards were also presented during the course of the night. Patrick Dardis received the Chairman’s award presented by BBPA Chairman and Chief Executive of St Austell Brewery Kevin Georgel, for his long-term service to the industry in various roles, including over 20 years as Chief Executive of Youngs.

Whilst John Longden of not-for-profit Pub is the Hub picked up the Industry Champion Award for his organisation’s work in helping pubs to diversify to further support their communities.

Upon receiving his award, Pub is The Hub chief executive John Longden said:
“You have no idea how special this is. This is also for the family of Pub is The Hub and to our family of supporters.

“We all enjoy collaborating and helping publicans in their local areas. For every £1 invested in a shop, community café, village garden or play area it creates between £8 to £9 of social value. It is the social value that helps to bind us together in this wonderful industry.

“We believe we can inspire 1,000 projects over the next three years and we have over 50 expressions of interest at this time.”

Inclusivity was also a key theme of the evening, with each of the sponsor bars from Asahi, Brewdog, Carlsberg Marston’s Brewing Company, Diageo, Greene King, Heineken, Lucky Saint and Molson Coors, sharing proactive diversity and inclusion initiatives they are implementing throughout their businesses and the Association’s #OpenToAll diversity and inclusion charter being promoted throughout the night.

The annual event was also a time to reflect on a difficult period for the industry whilst recognising its tenacity and resilience. Chairman Kevin Georgel drew comparison of the sector’s recent experiences to Christopher Columbus’ exploration into the New World saying “His world too, was turning upside down – his compass had let him down – could he trust it? Did he panic? Did he turn round? Did he despair? No, he held his course and sailed into history. In some ways our own compass has gone haywire for these past two years – but we have stayed true to our own North Star and carried on together.”

Emma McClarkin, Chief Executive of the British Beer and Pub Association said:
“This time last year we hoped were done with ‘unprecedented times’ but here we are again after another year of surprises, challenges, and once-in-a-lifetimes events.

“And throughout all of it our pubs and brewers have remained at the heart of villages, towns, and cities across the countries, providing a place of solace and community for so many and it’s why I am really proud to stand here tonight representing our brilliant industry.”