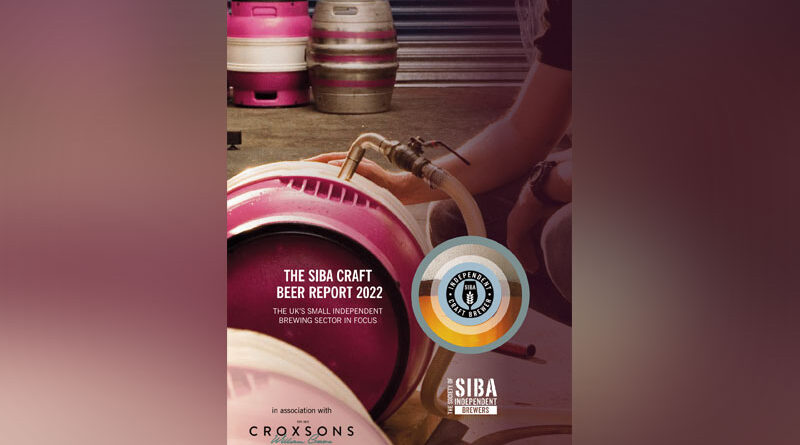 A new report published today shows the seismic shift in the UK Brewing industry over the last two years, with traditional cask beer under serious threat as consumers order more online and drink more at home.

The SIBA Craft Beer Report 2022, produced by the Society of Independent Brewers, contains in-depth analysis of the UK’s independent craft brewers, as well as industry insight and consumer polling to be the most authoritative report on the state of UK craft beer in 2022.

The report found that whilst overall beer sales across the whole market in 2021 were down 14.2% on 2019 pre-pandemic figures, the picture was much worse for small independent breweries, who saw production levels drop by an average of 40% in 2020 and 16% in 2021 when compared to 2019.

“Cask beer was sadly a casualty of the pandemic, as when pubs close small independent breweries lose the only place they can sell traditional cask beer. Because of this we have seen a huge wave of breweries creating webshops and on-site brewery shops, and many putting their beer into bottles and cans for the first time.” James Calder, SIBA Chief Executive.

According to the report cask beer now makes up just 46% of small brewers production, compared to 67% in 2019 – a huge 21% drop over the last two years. On the flipside a third of SIBA member breweries launched a webshop during the pandemic, and 40% now have a bricks and mortar shop.

However the report did also find a consumer thirst for craft beer in their local pub, with three quarters (75%) of beer drinkers surveyed in 2022 saying they thought it was important that their local pub offered a range of craft beers from small breweries.

“This shows the growing emphasis consumers place on the provenance of the beers they buy, and this is a trend that has certainly been accelerated by the pandemic. Consumers are increasingly seeking out smaller artisan producers and expect their products to be available at retail.” Caroline Nodder, Editor of the SIBA Craft Beer Report

That figure rises to more than 8 in 10 (81%) among the women surveyed, showing that provenance is of even more importance to female consumers – a part of the market small independent brewers continue to attract.

Consumers also continue to hold the view that genuine craft beer should be hand-crafted by a small independent brewery, with 50% saying the producer should be small and 48% that it should be independent. Only 3% believe craft can be made by a big global brewer. It’s a sentiment that goes both ways, with 90% of SIBA Members saying their relationship with their community is important (up 7% on 2020) to them.

“It is clear that over the last two years people across the UK have sought out local producers – whether that means supporting their local butcher, baker or brewer. More and more people are discovering the amazing range of beers now being brewed locally and increasingly hold the view that a craft beer should be made by a small independent brewery. Hopefully as the industry begins to get back up to full steam we will see more pubs ands retailers stocking the independent craft beers consumers have discovered over the last two years.” James Calder, SIBA Chief Executive.