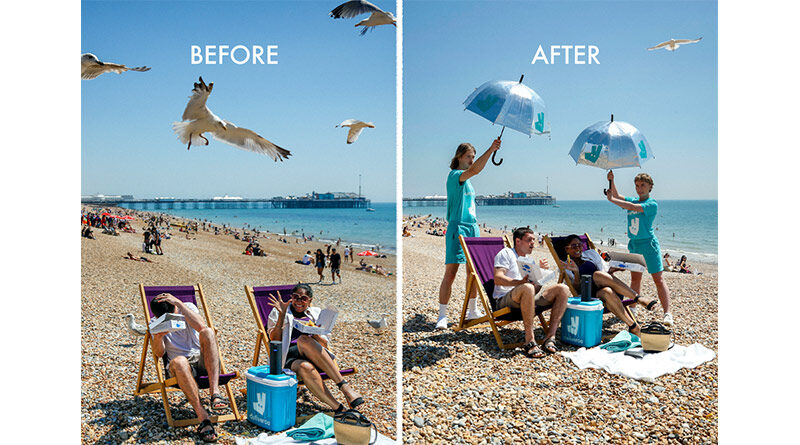 As a new survey reveals that 53% of Brits have experienced the act of robbery by seagulls while trying to enjoy an al fresco meal, Deliveroo swooped in to protect one of the summer’s essential rituals with the launch of ‘Chipwatch’ – a mobile seagull deterrent crew armed with reflective umbrellas, decoy hawks and a new seagull distracting track called ‘Bye Gull Bye’ by Deliveroo.

Deliveroo’s ‘Chipwatch’ experience helped save the holidays and invited beachgoers to enjoy their downtime without the interruption of greedy seagulls, especially since 95% of Brits are expected to flock to beaches this summer to enjoy a spot of al fresco dining.

With the new research from Deliveroo revealing that nearly half (44%) of Brits have been concerned in the past about eating outside due to a fear of seagulls swooping in to steal their precious food, the ‘Chipwatch’ zones have been created to give the nation the summer that it deserves, without the fear of daylight fish and chips robbery.

Although The Hoff wasn’t available to join the Chipwatch crew (sigh), the team still embodied the essence of the smash-hit TV show from the 90s, donning teal shorts and reflective jackets to boot. Beachgoers found the team patrolling the designated zones armed with propellers, reflective umbrellas and decoy hawks, all known to safely keep seagulls at bay.

Deliveroo has also worked with a gull expert and sound engineers to create a brand new audio track called ‘Bye Gull Bye’, which provided the background music to the ‘Chipwatch’ zones to further ensure a seagull-free experience. The track is also available to stream nationwide now on Youtube followed by a release Spotify [Link to YouTube]. It has been curated in collaboration with Dr Madeleine Goumas, a researcher of urban herring gulls from the University of Exeter, who advised on the curation of the track in a safe way for seagulls, whilst protecting diners at the same time.

Aisha Jefferson at Deliveroo, said: “One of the biggest summer rituals is al fresco dining, especially on the beach, but seagulls can wreak havoc on your peaceful picnic. If you’re worried about food-snatching seagulls, our Chipwatch crew will be on hand to protect you from having to share your food with our flying friends. If the beach isn’t your thing but you still find yourself covering your snacks, we’ve curated a music track that will safely distract and deter seagulls from pinching your food. It’s also a bit of a banger, which you can play via the Deliveroo Youtube or Spotify channel. Hopefully it’ll be music to your ears, but not so much the seagulls’…”

Madeline Goumas, from the University of Exeter said: “This is a great initiative to help the public enjoy their Summer holidays without the threat of unwanted birds, all whilst not being harmful to them. I partnered with Deliveroo to ensure the track was no harm to the seagulls and to use gull calls to ensure it is effective. Research supports the use of gull alarm calls for deterring gulls. This is the sound gulls make when they spot a predator, and it tells other gulls to keep away. We hope this track will allow people to eat their food in peace.”

No matter if Brits are eating on a beach, in a park, or in their garden this summer, Deliveroo’s new seagull deterrent music track will help to keep the gulls away. Search on YouTube and Spotify for ‘Bye Gull Bye’ to listen to the new track and eat food without having to hide it…