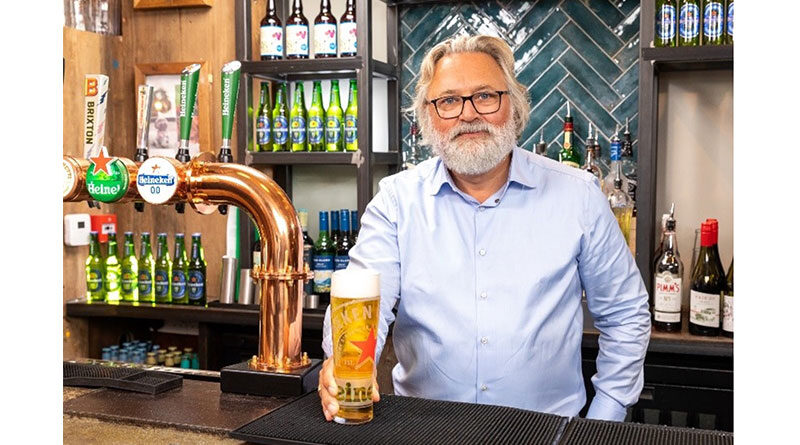 In what is a seminal moment for the British beer and pub industry, one of the world’s biggest brewers, HEINEKEN, has announced the launch of the nation’s favourite alcohol-free beer1, Heineken® 0.0, on draught, which will be rolled out to pubs next year. It will be the first alcohol-free draught beer that can use the existing cellar set-up and sit alongside regular beer taps in any pub – allowing operators across the UK the opportunity to maximise on the growing demand for no & low options.

As 1/3 of UK adults now moderate their alcohol intake2 the introduction of Heineken® 0.0 Draught lets everyone feel a part of the occasion – whether they’re the designated driver, moderating their alcohol consumption or choosing not to drink – and will be crucial in both normalising and accelerating the uptake of No and Low alcohol beer in the UK. At present, the no and low alcohol sector is worth £94M (0.6% share of total Beer and Cider) in the UK and £8M in Scotland3, but as more and more people moderate their drinking, abstain – temporarily or for the long-term – and drink more mindfully, the value of the category is set to increase.

90% of Brits prefer draught to bottled beer4, and previous data shows that dual-stocking Heineken® 0.0 in packaged and on SmartDispense™ BLADE gives a 133% uplift in sales compared to packaged alone5. Therefore, Heineken® 0.0 Draught sitting front and centre alongside other beer taps in pubs will be a huge opportunity for operators to boost sales with those looking to moderate.

The development of the product has been a labour of love for the brewer. Since 2017 scores of beer experts from HEINEKEN innovation breweries in four countries have worked collaboratively under the stewardship of HEINEKEN Global Master Brewer Willem Van Waesberghe, to bring Heineken® 0.0 Draught to market. The project and the upcoming roll out is a huge investment from HEINEKEN as they look to normalise no and low alcohol in the On-Trade.

Willem Van Waesberghe, HEINEKEN Global Master Brewer commented: “I’m incredibly proud of what we’ve achieved here. Once again we’re leading the way when it comes to innovating and moving the beer category forward. Without a doubt, the best way to enjoy a beer is a freshly poured pint in a pub and Heineken® 0.0 draught is going to play a big part in changing the way people drink.”

“For me and my team, one of the primary areas of focus, as always, is taste. The draught beer tastes great – it’s the distinctive famous Heineken® flavour – and it has all the sensory aspects beer drinkers look for – a mouth-watering aroma, bright white head and lively carbonation”

James Crampton, Corporate Affairs Director for Heineken UK, said: “This move aligns with our ‘Always a Choice’ promise. It’s all about providing a choice at the point of purchase and normalising the experience. In light of people’s evolving lifestyles and changes to their relationships with alcohol, we’ve done a lot to forward No and Low alcohol beer in recent years. We launched Heineken® 0.0 in bottles and cans in 2017 and followed it up with Heineken® 0.0 Draught on the counter-top BLADE system in 2019. Both were great innovations and are great products, but this is different, this is a game-changer.”

“Heineken® 0.0 draught brings No and Low alcohol beer from the periphery into the mainstream. We’re confident it will, over time, change pubs to accommodate more occasions. And by that, I mean it won’t be unusual for people to pop down to their local for an alcohol-free pint or two. That might sound strange now, but we’re confident in the very near future it’ll become the norm.”

James Crampton concludes: “Back in July at one of our five trial pubs, a barperson pulled the first ever pint of Heineken® 0.0 draught and handed it to a customer. The significance of that moment may or may not have dawned on them but makes no bones about it – it was one small pull for a bartender, but a giant leap for pub-kind.”