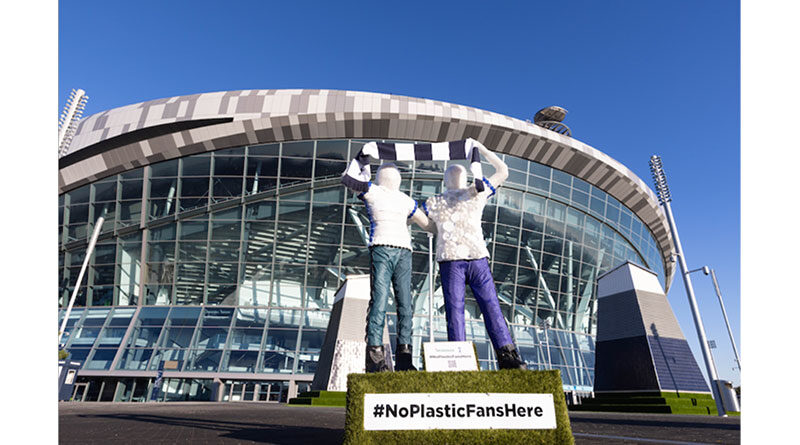 Today, HEINEKEN UK and two of the world’s largest football clubs, Manchester City and Tottenham Hotspur, have launched a campaign to remove plastic fans from football. But not as you might first think.

The #NoPlasticFansHere campaign seeks to remove fans of plastic from football and inspire football fans, on trade outlets and the general public alike, to join the sustainability journey the three parties are on. By embracing the adoption of more sustainable and plastic-free alternatives, both clubs, with the support of suppliers, are looking to further reduce their plastic use, along with their carbon footprint and ultimately, their impact on the planet.

To commemorate the launch of the campaign, HEINEKEN UK and both clubs have commissioned sculptor Sarah Turner to create two life sized plastic fans sculptures made entirely of reclaimed recyclable plastic waste. The sculptures have been made with over 200 bottle caps, 75 plastic bottles, two abandoned tents, 20 plastic bags, 20 coffee cup lids and much, much more*. These sculptures will be on display at both the Etihad Stadium and Tottenham Hotspur Stadium for this weekend’s Premier League fixtures, to inspire match goers and the wider general public, by demonstrating the positive changes both clubs are making.

Tottenham Hotspur and Manchester City have both made significant steps on their sustainability journeys in recent years, working with suppliers where needed, to develop and adopt more environmentally friendly practices.

Tottenham Hotspur F.C.
Tottenham Hotspur was named the Premier League’s greenest club following a study carried out by the UN-backed Sport Positive Summit, with a range of sustainable measures implemented across its operations. These measures included single-use plastic reduction measures in place across the Club – players drinking water from cartons, food is served in recyclable packaging with wooden cutlery, and even beer keg caps are recycled at the stadium. In addition, the club has a ‘zero to landfill’ waste management programme, with clear recycling instructions for fans on its bins, as well as a reusable beer cup scheme. The Nike shirts that players wear on the pitch and the replica jerseys for fans to buy are constructed with 100% recycled polyester fabric, which is made from recycled plastic bottles. The Tottenham Hotspur Stadium uses 100% renewable energy and has Zero Scope 2 emissions, utilising LED lighting (including floodlights) and high efficiency building services systems to reduce energy use.

Manchester City F.C.
Similarly for Manchester City, the club has made remarkable steps by removing all single-use plastics from the Etihad Stadium, resulting in over 1m plastic ups and 500k PET bottles being saved each season. In addition, the current Premier League champions have had recent success in trialling edible coffee cups, increasing vegan food options and switching to compostable packaging. Outside of plastic, the club successfully installed a new pitch that recovers two thirds of irrigation, of which 70% is captured rainfall. All watering of the pitch is then 100% rainwater, making significant reductions in water usage. The club also uses electricity from a certified 100% renewable source with zero CO2.

HEINEKEN UK, as part of its ongoing and long-term sustainability commitments, made the decision to remove supply of all single-use plastic bottles to its on-trade network in 2021. The removal of PET for beer and cider in these channels will save an estimated 6 million PET bottles or over 170 tonnes of plastic per year1. The brewer also delisted all third-party PET SKUs from its e-commerce website, encouraging direct-supplied customers to switch to more sustainable alternatives like aluminium or glass.

As well as reducing the amount of plastic packaging in its supply chain, HEINEKEN has also made a commitment to be carbon neutral across its value chain by 2040, and to reach net zero in the production of its ciders and beer by 2030.

Along with the commitment to remove all single-use plastic bottles, and following successful trials, HEINEKEN UK is also offering more sustainable cups for all on trade outlets, as an alternative to single use plastic. The reusable rental cup model features cups that can be used as many as 500+ times before being recycled. Each reusable cup uses significantly fewer materials and lower energy consumption during its lifetime than producing the equivalent number of single use cups. Alternatively, HEINEKEN’s paper cup option can be recycled in the normal wastepaper streams, are biodegradable, repulpable and compostable too.

HEINEKEN UK is calling on other football clubs, on-trade outlets and consumers alike to embrace more sustainable practices, including plastic-free alternatives, and to challenge their suppliers to provide better, greener options. By working with two of the world’s biggest clubs in Man City and Spurs, the brewer wants to demonstrate the scale of what can be achieved together and inspire others to further their sustainability journeys.

James Crampton, Corporate Affairs Director for Heineken UK, said: “Over the past 10 years, we have laid a solid foundation with our sustainability strategy, Brew a Better World, which focuses on the environment, social sustainability and responsible consumption. However, we are on a journey just like every other business and individual, to make positive changes to further reduce our impact on the planet. Together with forward-thinking partners like Manchester City and Tottenham Hotspur, we hope to inspire other businesses to act by demonstrating the benefit even small changes can have on our planet’s future. We hope our #NoPlasticFansHere campaign will do just that and spark a conversation among football fans and the wider hospitality industry, encouraging more people to choose plastic-free and sustainable options where possible.”

Pete Bradshaw, Director of Sustainability at Manchester City said: “Manchester City has developed an active agenda for sustainability which seeks to engage fans, community workforce and partners as we work collaboratively on this journey. From the investments made in water reuse and energy efficiency to waste management, consumption and transport futures – the Club has a clear set of values and is committed to change that works for the Club, city and region.

“The #NoPlasticFansHere campaign is a positive and engaging initiative that will hopefully resonate with our fans and raise further awareness of the need to reduce waste and pollution across our neighbourhoods, cities, oceans and planet and we hope that lots of our fans take time to visit the sculptures at this weekend’s fixture ”

Donna-Maria Cullen, Executive Director, Tottenham Hotspur, said: “We are delighted to have a partner in Heineken that shares our vision around using the unique platform of Premier League football to inspire positive climate actions. We have seen from our participation in Game Zero that our fans are fully engaged in our sustainability journey and will welcome the #NoPlasticFansHere campaign to Tottenham Hotspur Stadium. Our reusable beer cup scheme has proven to be a huge success since we opened our stadium and seeing our players drink water from cartons is an extremely powerful message. We look forward to continuing our work with Heineken to reduce and remove single-use plastic from our stadium, while also encouraging our fans to recycle their waste so that we remain a Club that proudly sends zero to landfill.”

The #NoPlasticFansHere sculptures will be on display at both Etihad Stadium and Tottenham Hotspur Stadium on Saturday 15th and Sunday 16th January, to communicate the changes being made by both clubs and the benefits of removing single-use plastic waste. For more information on HEINEKEN UK, its sustainable supplier solutions and realising your green ambitions, visit: https://www.heineken.co.uk/our-pubs/make-heineken-your-supplier/