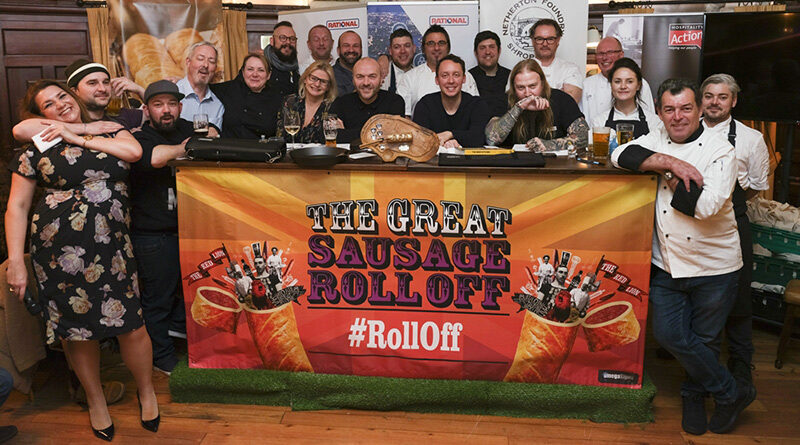 The Red Lion in Barnes is delighted to announce that the Great Sausage Roll Off is back – taking place on Wednesday 8 February 2023. Every year, managers of The Red Lion, Angus McKean and Claire Morgan, host their iconic chefs’ competition in a continued quest to find the best sausage roll in the land.

Previous years’ judging panels have included Michelin-starred chefs, MasterChef winners, food critics and other icons of the British culinary scene. This year will be no different, if not better. The Great Sausage Roll Off is now hunting for new competitors from all walks of catering – pub chefs, hotel chefs, development chefs, food writers, chefs from restaurants, cafes, food trucks, contract caterers and beyond. Anyone looking to get their sausage roll creations in front of the expert judges can enter the competition by completing the online entry form.

The competition will see entrants heading to The Red Lion on the night to cook up their sausage rolls and present them to the panel of esteemed judges and the general public, who will be crammed into the South West London Fuller’s pub. Everyone will have the opportunity to sample the savoury snacks alongside the judges – with a view to raising funds for the charity Hospitality Action while simultaneously enjoying themselves.

Angus McKean, General Manager of The Red Lion, said: “Claire and I are really excited to bring Roll Off back. After nearly three years of no sausage rolling due to the pandemic, we’re ready to bring the competition back with a bang(er) and we can’t wait to see some new creations, innovations and clever twists on the famous classic.

“We started Roll Off as a bit of fun back in 2013 and it was an instant success – capturing people’s imagination and giving a night of serious, tongue-in-cheek fun for some very talented cooks and our lovely customers. It has since snowballed into a special spectacle and a night for industry folk to come and let their hair down in a kind of X-Factor meets Masterchef way. The Great Sausage Roll Off has also developed into a fledging charity fundraiser and a magnet for all foodies to come and rub shoulders with some of hospitality’s shining stars and glitterati. Never underestimate who you may bump into at Roll Off.

“So have a think about your ideal sausage roll, create the recipe, and enter the Great Sausage Roll Off 2023 today – it may be the next thing your career needs, and you might even get on the telly.”