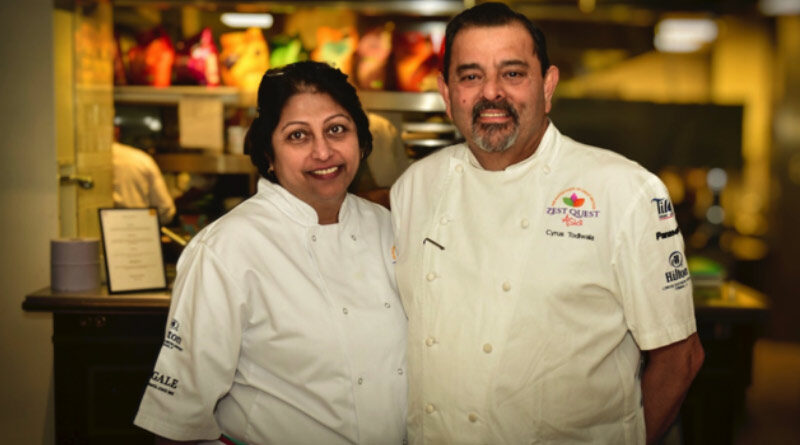 Students who believe they have the talent and ambition to prove their mettle in the world of Asian cuisine can now submit their entries to Zest Quest Asia 2023.

Founders Cyrus and Pervin Todiwala have announced the official launch of their annual ground-breaking competition, first created in 2013 with the support of the Master Chefs of Great Britain. Zest Quest Asia is designed to encourage students to strive for excellence in the knowledge, understanding and preparation of Asian food.

Now on its ninth year, the competition is open to all full-time catering students with permanent residency in the UK. There are no age limits, so that mature students, provided they meet the criteria, can take part.

Zest Quest Asia is organised by the Todiwala Foundation, a not-for-profit entity set up to support catering education and training, particularly in the Asian culinary arts. Last August, the foundation was able to distribute small cash grants of up to £500 to students via their colleges, including North Hertfordshire College, The Sheffield College, Loughborough College and The Colchester Institute who in turn have used the grants to fund the purchase of items students need but may find difficult to afford. To-date, Zest Quest Asia has been funded entirely through sponsorship, and the Todiwalas are proud to announce this year’s line-up of confirmed gold sponsors: Tilda, Hilton, Cobra, Meiko, Panasonic, Schwartz by McCormick Flavour Solutions, and Mizkan.

Zest Quest Asia is a team competition whereby colleges field 3 students supported by their lecturer. Both entry requirements and judging criteria are rigorous; while the presentation of the dishes can be modernised, their preparation must reflect authentic Asian cooking techniques and ingredients. Finalists will go forward to a live cook off-to be held at the Hilton London Heathrow Terminal 5 on Friday, 17th February 2023, and the winners will be announced at a Gala Dinner that evening.

The grand prize is a cultural and educational trip to a secret Asian destination only revealed on the night. Since the launch of the competition, Zest Quest Asia champions have travelled to India, Japan, Sri Lanka, Thailand, Vietnam, and the Philippines. There will also be a number of additional prizes, such as a voyage of discovery to Italy for the team demonstrating the Best Use of Rice, sponsored by Tilda.

Cyrus Todiwala said,
‘Once again, we are expecting great things from college students from around the UK through their performance in Zest Quest Asia. This summer, Pervin and I hosted a gathering at our restaurant, Café Spice Namaste, where college lecturers who witnessed how their had students bloomed because of Zest Quest Asia were only too proud to share how much value they now attach to what was once a fledgling competition.

“Zest Quest Asia is a substantive competition – resources are poured into making sure students have as much support as possible even before the competition, such as the tutorials and masterclasses provided by our food sponsors. In fact, students gain the most points from their ability to demonstrate their knowledge and understanding of the cuisine.”

Pervin Todiwala said,
“Hundreds of students have entered Zest Quest Asia since we launched the competition in 2013. The winners have had experiences in different Asian countries that have brought them into direct contact with both the culture and cuisine they may not have discovered had they not competed in Zest Quest Asia. Their hearts and minds have been opened to new worlds.”

Steve Munkley, Zest Quest Asia chairman of judges said,
“It’s not a matter of simply cooking, although that is a challenge in itself, but it’s being able to show an appreciation of the culture behind the chosen Asian cuisine. But then the prizes are sensational. I don’t know of many student competitions that are as demanding and rewarding. Zest Quest Asia motivates our industry’s future to aim high.”

The deadline for submission of entries to Zest Quest Asia is Friday, 16th December 2022. Finalists will be announced on Wednesday, 4th January 2023. For more information on how to enter, please contact Cora Strachan at cmsevents@btinternet.com. Information will also be made available at www.zestquestasia.org