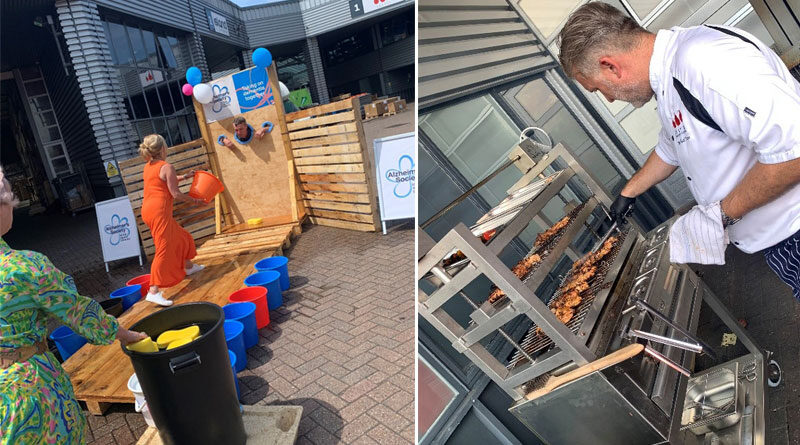 A series of employee events organised as part of Jestic Foodservice Solution’s summer charity drive has helped raise in excess of £2,500 for two charities; The Alzheimer’s Society and Kent based charity Crossroads Care.

The annual company BBQ, which was held recently at the Paddock Wood headquarters, aided over 60% of the final total. This was not only thanks to the fantastic feast once again laid on by the Jestic culinary team, but also due to the capture of many of the directors, who found themselves locked up for short periods of time in the hastily arranged stocks, that just happened to be close to buckets of water and sponges! The remaining money was generated from a series of summer hamper raffles which occurred at engineer training sessions and meetings.

Ben Dale, Managing Director at Jestic Foodservice Solutions was thrilled to be able to make such a substantial donation:
“Jestic’s charities are largely chosen to help give back and show support to a colleague or a family member who have turned to the organisation at their time of need. I am thrilled to be able to donate such a fantastic amount to The Alzheimer’s Society, a vital source of support and a powerful force for change for everyone affected by dementia, and Crossroads Care Kent , who deliver care and support for those living with the challenges of caring unpaid for a family member or friend. This could not have been achieved without the generosity of Jestic’s amazing team of people who have once again dug deep when it matters most.”