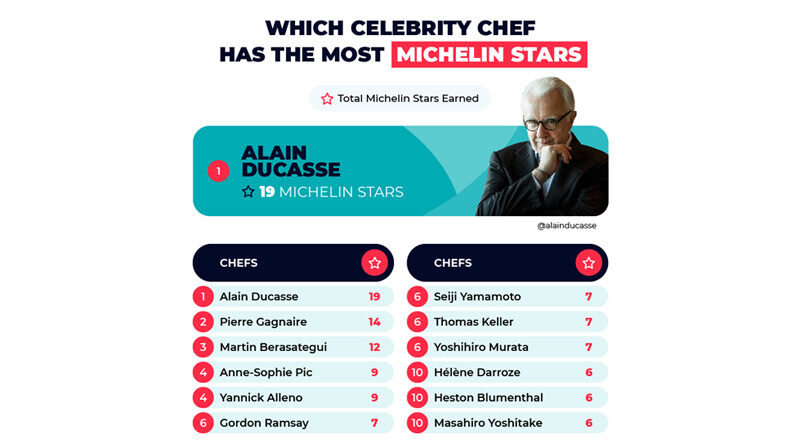 Research undertaken by Slingo revealed that Alain Ducasse has the most Michelin stars of any celebrity chef with 19, followed by Pierre Gagnaire (14) and Martin Berasategui (12).

Ducasse currently holds 19 Michelin stars, though in 2012 he had 21, becoming only the second chef to hold that many. He owns Alain Ducasse at the Dorchester, which holds a three-star rating from the Michelin Guide.

Pierre Gagnaire has a number of restaurants through which he has been awarded a total of 14 Michelin stars. In 2015, he was voted by his peers as ‘the best chef in the world’.

Spanish chef Martin Berasategui has a total of 12 Michelin stars and is one of the few chefs to own multiple three-star restaurants, Restaurante Martín Berasategui, his parent’s restaurant which then became his first and Restaurante Lasarte.

Also making the list was Gordon Ramsay who has seven Michelin stars. Slingo also carried out research on how many restaurants celebrity chefs own, their social media earnings and which chef is active in the most countries around the world.

To access the rest of the research, visit here.