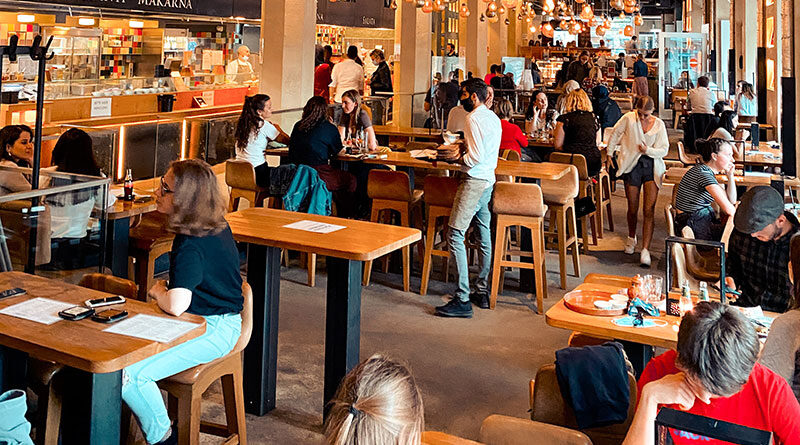 Consumer card spending grew 18.1 per cent in April compared to the same period in 2019, the highest uplift since October 2021 – with the travel sector seeing its best month since before the pandemic. However, inflation and rising living costs are starting to impact the retail and hospitality sectors, with a number of categories seeing smaller uplifts than last month.

Data from Barclaycard, which sees nearly half of the nation’s credit and debit card transactions, reveals that spending on essential items increased 17.4 per cent – slightly less than in March (18.1 per cent). This was largely due to spend on fuel falling from a record 26.1 per cent increase last month to 23.0 per cent in April, in a possible sign that Brits are reducing car usage as a way to save money.

The proportion of Brits feeling concerned about the impact of higher household bills on their finances remained high at 90 per cent. Average spending on utilities per customer jumped 28.8 per cent year-on-year, as cost increases also continued to hamper consumer confidence, with optimism about the future of the UK economy falling slightly from 27 per cent in March to 25 per cent in April.

Despite the challenging economic backdrop, spending on non-essential items grew 18.4 per cent compared to the same period in 2019, representing a small uplift from last month (17.5 per cent).

Spending on hotels, resorts and accommodation rose 16.6 per cent compared to three years ago, the category’s highest growth since September last year, while the international travel sector had its best month since before the onset of COVID-19. Travel agents and airlines saw significant improvements, declining just -3.5 per cent and -9.9 per cent respectively, compared to last month’s contractions of -10.7 per cent and -12.0 per cent.

This comes as more than a fifth (21 per cent) of Brits say they are making social or holiday plans for the long weekend in June to mark the Queen’s Platinum Jubilee, with 16 per cent of this group opting for a staycation in the UK.

Almost a fifth (17 per cent) of Brits are also spending more on special occasions (such as weddings and hen/stag dos) and holidays this summer, to make up for lost time over the last two years. Among this group, some of the most popular purchases are new clothes and accessories (27 per cent), and beauty products such as fake tan and make up (13 per cent).

This behaviour was reflected in retail spending – clothing saw a 12.6 per cent uplift, higher than last month’s 10.1 per cent, department stores returned to growth (1.3 per cent) after seven months of decline, and pharmacy, health, and beauty stores also saw an improvement (20.2 per cent vs.18.8 per cent last month).

In a sign that Brits enjoyed more time outside in the sunnier weather, spending on at-home experiences or ‘insperiences’, though still in growth (63.5 per cent), saw a slightly smaller increase than in March (66.0 per cent). Within this category, spending on digital content and subscriptions also saw slightly less growth month-on-month (52.1 per cent compared to 56.7 per cent), possibly due to some Brits cancelling their entertainment subscriptions in response to rising living costs.

Spending on takeaways and nights out was also reined in as growth on fast-food and takeaways (77.9 per cent) as well as bars, pubs, & clubs (39.2 per cent) was lower than in March (79.6 per cent and 41.7 per cent respectively).

José Carvalho, Head of Consumer Products at Barclaycard, said:
“The impact of rising living costs on consumer spending is starting to show, with a number of categories – including subscriptions, takeaways, and bars, pubs & clubs – seeing less growth than in March as Brits begin to feel the pinch. However, the improvements seen by airlines and travel agents are particularly positive, and hopefully point to a recovery in spending on international travel later this year.

“While concerns around rising household bills may continue to hamper spending on non-essential items, the upcoming Platinum Jubilee Weekend and summer months should provide opportunities for Brits to spend on celebrations and make the most of warmer weather.”