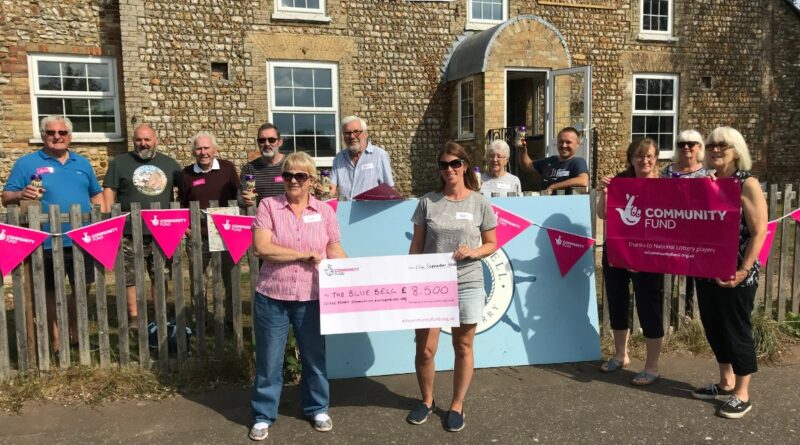 Campaigners who rescued the Blue Bell Inn in Stoke Ferry, Norfolk have been recognised with the Campaign for Real Ale’s prestigious Pub Saving Award for their efforts.

The Blue Bell, which was the last pub in the village of Stoke Ferry, has been trading as a pub since 1794; however, it was closed in March 2018, and in 2019 and application was submitted to convert the pub into housing. Local villagers fought back, and the Blue Bell was listed as an Asset of Community Value (ACV) in March 2020, giving the community time to raise funds to buy the premises.

Throughout the Coronavirus restrictions that came into effect not long after, a dedicated committee continued to fight for the pub, leafletting, holding online wine and beer tastings and quiz nights. Celebrity support came in the forms of England cricketer Ryan Sidebottom, comedian Stephen K Amos and Stephen Fry.

After a long journey that one of CAMRA’s judges described as “a tale of dogged persistence ending in triumph”, the Blue Bell pub was purchased in June 2021 – of the pub’s 400-plus investors, more than three-quarters are firmly and proudly local. While the pub has not yet reopened, volunteers are hard at work to fully renovate the building, which will become a true community pub-café hub. Plans are in motion to host an all-day café service, a swap-shop for books and home-grown produce, parent and toddler mornings, as well as regular lunches for the over 60s’ and other vital services.

Jim McNeill, volunteer coordinator, said on behalf of the Stoke Ferry Community Enterprise: “We are thrilled that we have been awarded the Pub Saving Award by CAMRA. When we first started our campaign to rescue the Blue Bell Inn, we surveyed the villagers in Stoke Ferry, and one-third of households responded – with over 90% of respondents saying the village needed a local pub. I am delighted that local people have saved the Blue Bell for our village and its future generations. We have had to contend with many peaks and troughs on the journey, not least the limitations that lockdown had, and could not have done it without the hard work of our volunteers and supporters. We aim to reopen the pub in the coming spring and in it create a true hub of community spirit.”

Runner-up for the award is the campaign to save the Railway Arms in Saffron Waldon, Essex. This 19th century branch line pub was saved in October 2020 after a 4-year campaign by the group STRAP (standing for ‘Save The Railway Arms Pub’). Closed on New Year’s Day 2016, the owners had plans to build houses on the pub garden and convert the main buildings into residential ones. With advice and guidance from the Plunkett Foundation and More Than a Pub, a public meeting, attended by 130 people, was held in Saffron Walden Town Hall in April 2017, kickstarting the campaign to save the Railway Arms.

To keep STRAP in the public eye, a regular stall was set up in Saffron Walden market on a Saturday and quarterly weekend ‘pop up’ pub sessions were held in a local community centre – ‘Not the Railway Arms’. After a prolonged campaign, the pub came into community ownership in October 2020, before reopening under COVID restrictions on 16 April 2021. Since opening, as well as providing a full range of pub services and facilities, the Railway Arms has hosted theatrical performances in the garden, played a full part in Saffron Walden’s ‘Fete de la Musique’, hosts a local cycling club whose weekly rides start and finish at the pub and has a fortnightly ‘knit and natter’ session organised by a local craft shop.

The announcement of the Pub Saving Award winner and runner up comes at a time when the nation’s pubs are all in need of support, as speculation mounts around possible restrictions over Christmas and the New Year. The work of communities around the country has been crucial to helping pubs survive the COVID-19 pandemic.

Co-ordinator of the Pub Saving Award Paul Ainsworth said: “This year’s winners both have long journeys behind them, and are two examples of superb campaigning to save beloved local pubs – only made more difficult due to the coronavirus restrictions throughout 2020 and 2021. It just goes to show what can be achieved when a community bands together to make a difference, and we are excited to see what is next for the Blue Bell and Railway Arms.”