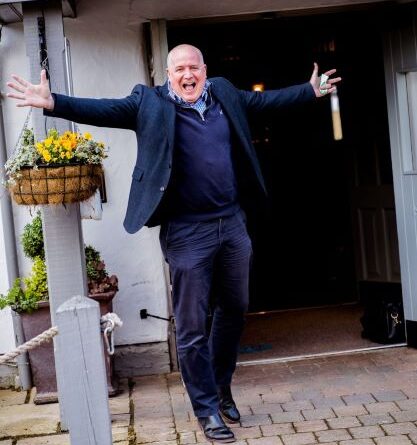 A Greene King managing director has been awarded an MBE in the New Year’s Honours list for services to Business and Charity during Covid-19, benefitting Greene King’s chosen charity partner, Macmillan Cancer Support.

Andy Wilson, who is managing director for the pub company and brewer’s Destination Food Brands division, has received an MBE for services to Business and Charity during Covid-19.

Andy has been instrumental in driving £2m of fundraising in 2021 by Greene King’s 40,000 team members, supporting a number of events and even running the London Marathon in October.

In response to the news, Andy said: “I’m absolutely thrilled to receive an MBE and to have helped support Macmillan Cancer Support over what has been an incredibly difficult time for charities impacted by the Coronavirus pandemic.

“Greene King is more than pubs and beer: it’s about creating a heart of the community and giving something back. Our teams have done a fantastic job fundraising this year and it has been amazing to witness. I’m incredibly proud of all of them and this really has been a team effort throughout.”

Andy has been with Greene King since 2013 when he originally joined as an operations director before now heading up the company’s food-led brands including Hungry Horse, Chef & Brewer and Farmhouse Inns, as well as Greene King’s hotels.

As well as running the London Marathon most recently, Andy has also while at Greene King cycled from London to Paris and London to Amsterdam, climbed Mount Snowdon and taken part in a Macmillan Tough Mudder challenge, as well as hosting a number of online quiz nights. Each time he has personally raised thousands of pounds for the charity.

Greene King CEO Nick Mackenzie said: “Andy has put his heart and soul into raising vital funds for Macmillan Cancer Support and I’m delighted he has received an MBE. He’s a constant driving force within our company, always thinking of new ways to engage pub teams, support centre staff and the Greene King leadership team in raising money. He is renowned for his infectious enthusiasm and energy, qualities that allow him to be so successful in motivating all around him. I look forward to seeing what his next fundraising challenge will be!”