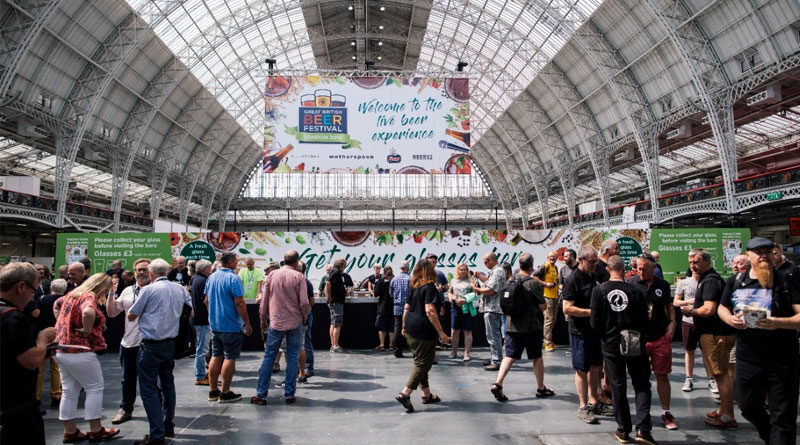 Tickets for the Great British Beer Festival are now on sale, as Britain’s premier beer festival plans its return to Olympia London from 2-6 August, following a two-year hiatus due to the Covid-19 pandemic.

Visitors can try brews from over 500 different breweries from both the UK and beyond. Real cider and perry will also be on show, along with the return of our successful gin and wine bar.

Festival-goers can also sample some of the very best cask beer America has to offer, thanks to a cask beer exchange set up between the Great British Beer Festival and the New England Real Ale Exhibition. The festival will also boast a wide range of street foods to suit all dietary requirements and tastes.

This year GBBF will be introducing a new ticket package which include beer tokens, a non-refundable glass, and a festival programme. General admission tickets are £20 in advance (£24 on door). VIP packages, season and group tickets are also available for die-hard fans.

Festival Organiser Catherine Tonry said:
“We’re incredibly excited for the Great British Beer Festival to return to London after an unscheduled hiatus. We look forward to inviting beer lovers from across the UK to London to sample some of the best beers in the country. Come and experience the natural magic of grain to glass, while enjoying delicious street food and our incredible selection of only the finest beers.”

The Great British Beer Festival wouldn’t be possible without the hard work of dedicated volunteers from across the country who converge on London to organise the best beer show in the country. Nearly a thousand volunteers take part in the event on behalf of the Campaign for Real Ale, a not-for-profit consumer group that campaigns on a range of issues to support the beer, cider, pubs and clubs, and ultimately, the consumers. All festival proceeds go directly back into CAMRA campaigning activity.
To get your ticket, please visit: https://gbbf.org.uk/tickets/