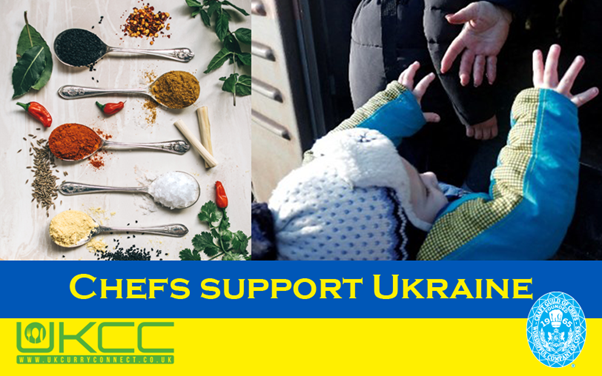 The Craft Guild of Chefs and UK Curry Connect have joined forces and launched a scheme called ‘Chefs support Ukraine’.

They are asking their respective members to think how best they can raise funds to support those in need in war torn Ukraine.

Matt Owens, chair of the Craft Guild of Chefs comments: “This is a scheme that has brought together two great organisations who, with their combined membership, can really make a difference. We are asking our members to consider ways in which they could raise money through their catering outlets in the various sectors.”

Shah F. Athar, COO, Director of Policy and Project co-ordinator at UK Curry Connect agrees: “With the kind support of our members, we can help more children and families affected by this crisis. Every establishment is different, but together we can make a difference. How each restaurateur or Chef raises their donations will be entirely up to themselves.”

Together they have created a JustGiving page: www.justgiving.com/fundraising/chefsforukraine . Any donations will be going directly to UNHCR, the United Nations Refugee Agency.

The campaign will run until the end of June with an initial target of £10,000.

The war in Ukraine has forced almost 5m people to flee the country. UNICEF consider that more half of the country’s children are now displaced, whilst millions of children and their families remain in immediate danger.

Aid agencies like UNHCR are working around the clock in Ukraine and at the borders of neighbouring countries, providing access to clean water, health care services and other critical support.

Chief Executive of the Craft Guild of Chefs, Andrew Green adds: “As the refugee crisis grows, the charities’ teams in Poland, Moldova, Belarus, Romania, Slovakia, Hungary and Czech Republic are working closely with their UN partners to provide more humanitarian aid for children and families on the move but they need our help and we think this is a way that can show solidarity across the hospitality industry.”